The officer wouldn't 'Let It Go' 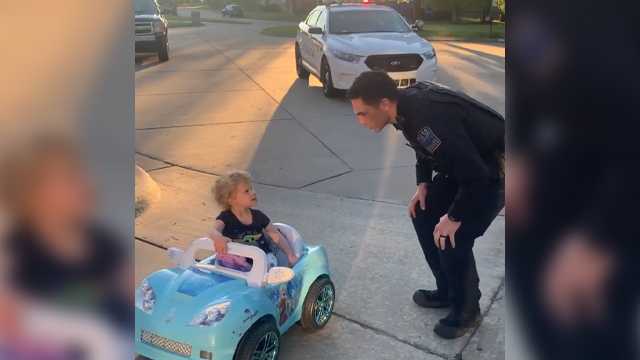 Having some fun, Tulsa Police Officer Conner Mackenzie turned on his lights and three-year-old Lela Adams immediately pulled over in a driveway.

It's convertible season, and we'd like to issue a fair warning that 3-year-olds illegally driving "Frozen" teal convertibles will be held to the highest standard of the law. pic.twitter.com/lhSWLr2YRG

In cell phone video taken by Lela’s mom, Sierra, you can hear the little girl tell the officer she didn’t know how fast she was going, but said she had her driver’s license and everything else he needed, even putting her hands on the steering wheel for the officer to see.

Officer Makenzie: “You got insurance?”

Officer Makenzie: “No? Well, all right. Just be careful, OK? Don’t want you to get into any trouble, all right?”

Lela’s mom said they were passing Officer Mackenzie’s house when he got home and she suggested the idea of pulling over Lela.

Officer Mackenzie never hesitates to have positive interactions with the kids and it was traffic stop that will be remembered and in “Frozen” fashion, he finally let Lela go.

Share and speak up for justice, law & order...
Tags: Disneyfrozenlet it goNewsTulsatulsa police