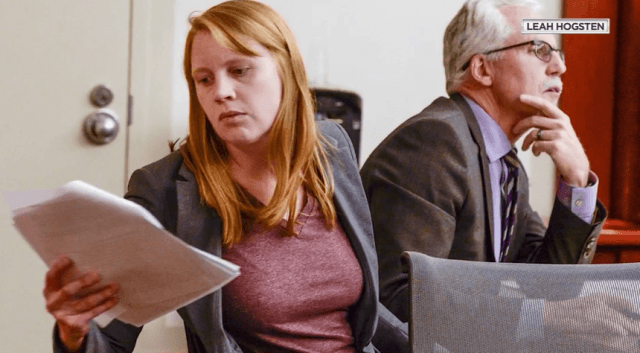 SALT LAKE CITY – In a bizarre case, a topless Utah stepmom was charged with lewd conduct. Moreover, the woman is facing criminal charges that could force her to register as a sex offender after being seen topless by her stepchildren inside her own home.

Tilli Buchanan, 28, was working with her husband in their garage in late 2017 or early 2018. They were reportedly installing insulation when they both removed their shirts, The Salt Lake Tribune reported.

As a result, the children, ages 9 and 13, saw the couple both topless. When their birth mother later heard about the incident, she mentioned it to child welfare officials because she was “alarmed,” the report said.

Consequently, the stepmother was charged in February with three counts of misdemeanor lewdness involving a child. The husband faces no charges.

If convicted, the woman could be forced to register as a sex offender for 10 years.

“If we lose this, she’s on the sex offender registry with child rapists and things of that nature,” Buchanan’s lawyer, Randy Richards, told the Salt Lake Tribune. “The magnitude of the penalty on this is enormous.”

After a court hearing in Salt Lake City, Buchanan spoke out against what she views as a double standard regarding topless men and women.

Tilli Buchanan's attorney argued her husband was also without a shirt, yet he was not charged with any crime.https://t.co/r0aEqeicon

“It was in the privacy of my own home. My husband was right next to me in the same exact manner that I was, and he’s not being prosecuted,” she said.

But prosecutors in West Valley City argued Buchanan was “under the influence of alcohol” when she removed her shirt and made a comment that she would put it back on only if her husband exposed himself, the Tribune reported.

Several states around the U.S. have been engaged in debates over whether women should be allowed to be topless in public.

Buchanan’s attorneys had leaned on a recent 10th Circuit Court ruling, where the appeals court sided with two Colorado women who sued Fort Collins. The women are part of “Free the Nipple Fort Collins,” a group arguing that the city’s ban on female toplessness violated their right to equal protection.

West Valley City Deputy Attorney Corey Sherwin argued in response that the “Free the Nipple” ruling was very narrow — and did not make any findings about whether the law there was constitutional or not. He said there hasn’t been any past cases that have “completely undone the notion that the Legislature cannot legislate morality.”

Sherwin further argued that the law is based on what society deems to be nudity.

The judge expects to reach a decision in about two months, the Tribune reported.