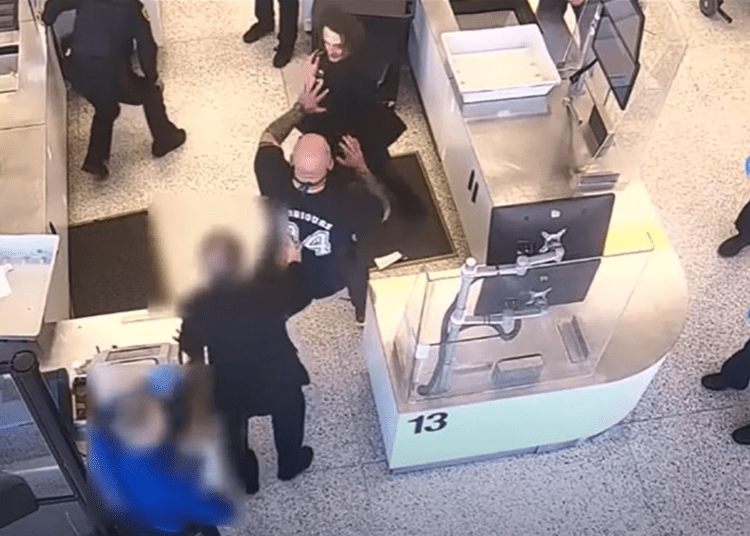 SALT LAKE CITY – Police in Salt Lake City released a video showing a retired law enforcement officer jumping in to assist a uniformed officer who was being assaulted while arresting a suspect at the city’s airport last month.

A Salt Lake City officer assigned to the airport division saw the disturbance and took action to stop the man from bypassing the security checkpoint, FOX13 Salt Lake City reported.

While being placed in handcuffs, the suspect suddenly began resisting the officer and tried to break free, according to authorities. Ultimately, the fight went to ground where the officer tries to maintain control of the combative suspect.

Surveillance and police bodycam footage shows the man punching and kicking the officer who is trying to subdue him. During the struggle, an airline passenger saw the assault and jumped in to help the officer.

Enrique Rodriguez, a retired law enforcement officer, was identified as the passenger who jumped in to assist with the arrest. He can be seen on video taking the suspect down to the ground and holding him while the officer places the fighter in handcuffs, FOX reported.

The retired officer said he spent 12 years with LAPD before a lateral move to a smaller agency in Southern California. He was visiting Utah at the time of the incident.

“That’s not a normal action for a normal person. I don’t know anything what’s going on with that gentleman, but that’s not normal activity. When something like that happens, you have to think the worst to be prepared to handle any situation that arises,” Rodriguez told FOX13.

SLCPD said they are grateful Rodriguez was there to assist their officer, according to the news outlet.

Further investigation revealed the unnamed combative suspect was not a ticketed passenger and had no business at the airport, according to authorities. Hence, the case is being referred to the FBI and U.S. Attorney’s Office for federal prosecution.