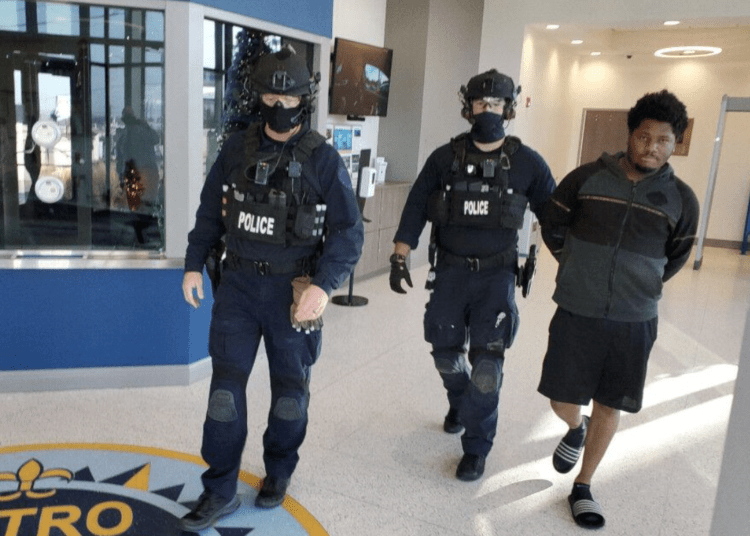 NASHVILLE, Tenn. — A Tennessee man has been arrested in the fatal shooting of a Nashville intensive care nurse.

Devaunte Lewis Hill, 21, was charged with criminal homicide in Caitlyn Kaufman’s death, the Metro Nashville Police Department tweeted on Friday. The 26-year-old healthcare worker was murdered during her commute to St. Thomas West Hospital on Dec. 3.

According to The Associated Press, a Metro Parks police officer found Kaufman’s gray Mazda CX-5 SUV on the right shoulder of Interstate 440 at 8:52 p.m. and stopped, believing it to be a single-car crash site. He discovered a woman was shot.

Kaufman died at the scene.

BREAKING: Devaunte L. Hill, 21, is in custody for the murder of Nashville nurse Caitlyn Kaufman. MNPD SWAT members arrested him at 6:15 a.m. at his East Nashville apartment. He is being charged with criminal homicide. pic.twitter.com/lJ6LMHy8v7

A tip led the Metro Nashville Police Department to Hill’s East Nashville apartment complex, where he was arrested without incident, according to Chief John Drake.

“Without going into detail, which I cannot do at this point, he gave a statement implicating himself in Caitlyn’s murder,” Drake told WSMV.

The Tennessean reported Friday that data from Hill’s cell phone provider placed his phone on Interstate 440 at the time of the shooting.

Moreover, investigators found three shell casings on the interstate at the shooting scene, WSMV reported. Police said there was a 100% match to the 9mm handgun a witness said Hill possessed.

“Our detectives located the gun Thursday night. We called in our ballistics experts overnight at the crime laboratory to do an immediate analysis,” Drake said. “That gun was test fired and we have a 100% match of the three 9mm casings found at the corner of the road at I-440 the night Caitlyn was killed.”

Devaunte Hill has been charged with criminal homicide by Metro Police in connection with the shooting death of Nashville nurse Caitlyn Kaufman. (Metro Nashville Police Department)

Homicide Detective Christopher Dickerson told reporters Friday morning that investigators had not ruled out the possibility of more suspects or arrests.

Dickerson said that Hill and Kaufman did not know each other, but no motive has been announced.

Hill is being held without bond. Drake said a more than $65,000 reward may have encouraged residents to give information to police.

“Those who knew Caitlyn Kaufman witnessed the overwhelming compassion and kindness she showed for each person she cared for and worked alongside,” Saint Thomas West Hospital said in a statement.

“If it weren’t for the generosity of the Nashville community, I fear it wouldn’t have ever happened this quickly,” she said. “I think I’m still in shock. I was in shock with the shooting, but now I’m in shock with the arrest. I’m just so thankful.”

YouTube prankster gets shot and killed during ‘fake robbery’