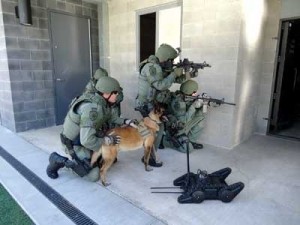 I attended a SWAT K-9 Interacting During Deployment School (S.K.I.D.D.S.) course June 4–6, 2014, hosted by the Spokane County (Wash.) Sheriff's Department. The primary instructor of this course is Brad Smith, a retired 30-year veteran of the West Covina (Calif.) PD (a name familiar with many in law enforcement and an occasional contributor of articles to Law Officer Magazine). Smith has been instructing this course since he founded it in 1997. I previously attended this course in 2006 when it was hosted by my own agency. As with all worthwhile training, it must continue to evolve in order to remain relevant, so I was not disappointed when I saw that the class has incorporated tactics for utilization of technology and current best practices in canine training and deployment.

The three-day course brings K-9 handlers and their partners together with tactical operators in an educational format that begins with a classroom presentation that lays the groundwork for the remainder of the course. Following classroom instruction, a significant amount of practical exercises are conducted, which become the building blocks for success in real-world scenarios.

The most obvious change in course curriculum from several years ago is the seemingly great marriage of technology (robot) and animal (canine). Robotex made available to the class its well-respected AVATAR robot, which is used with the canine to enter buildings, clear rooms and locate hidden suspects. The dogs are conditioned early on in the training to ignore the presence (and movement) of the robot. Once that fairly simple (yet important) task is accomplished, the operators learn to work the robot and canine in conjunction with each other to locate a suspect from a position of cover and/or concealment. The canine's olfactory ability is utilized to assist in locating the suspect, while the AVATAR is deployed to make use of its pan/tilt/zoom and drive cameras to transmit back to the team what is seen and heard. (The AVATAR has passive overhear capability, which allows it to transmit audio as well as video back to a receiver.) By exploiting the capabilities of both animal and machine, officers learn to stack the odds of safety and success in their favor.

With proper training, the AVATAR can be used to track the movement of the canine, sending audio and video that can be monitored in real-time by the handler and team members. With both white-light and infra-red capabilities, the cameras are able to "see" even in extremely low-light environments. This allows the handler to pick up on subtle changes in the dog's behavior that may indicate the presence or location of a hidden suspect. This is accomplished while the handler/team remains in a position of safety. Once the suspect's location becomes known, the team can then formulate a tactical plan to take the suspect into custody in the safest manner.

The AVATAR employs the ability to have two-way verbal communication. That feature permits the robot operator (holding a "controller" that controls the robot much like a remote-controlled car but also contains a video monitor) to remotely give verbal orders to a suspect. Say, for instance, the suspect is located by the canine hiding in an elevated position or behind a door where the canine cannot get to the suspect. The canine's alert can be seen and heard by the handler and team members viewing the remote monitor. The canine can be left to "guard" the suspect while the team advances in a safe manner to make contact with the suspect. The robot's cameras can be utilized to watch the area the suspect is located in, and both the hiding area and canine's actions can be monitored via the robot camera as the team approaches.

There are many scenarios wherein a properly trained and equipped team, utilizing a combination of contemporary tactics, modern technology and sound police work can enhance the safety of innocent persons and law enforcement officers. Just as certain tools (think AVL, Taser, armored rescue vehicle, tourniquet) have become industry-wide standards, I believe the integration of canines and technology such as the AVATAR will become expected best practices.For more information regarding S.K.I.D.D.S. courses, contact Brad Smith at [email protected] or visit his website at skidds.com. For more information about the Robotex AVATAR robot, visit Robotex.com.