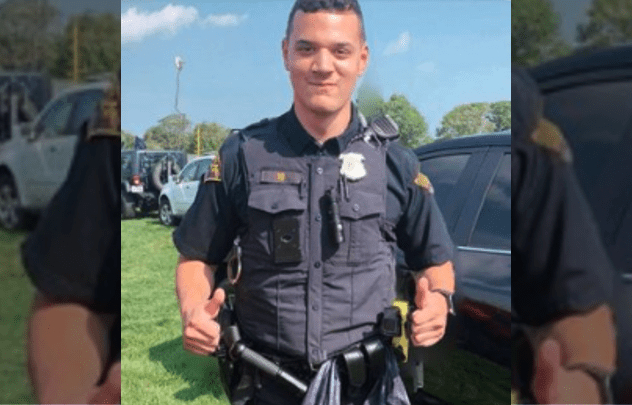 CLEVELAND — Cleveland Police Officer Shane Bartek was shot and killed on New Year’s Eve last year in a carjacking that occurred in the Kamm’s neighborhood of the city. Now his killer has been found guilty. Jurors convicted Tamara McLoyd of the murder that occurred during a carjacking.

McLoyd, who turned 19 during trial, ran up with a gun behind Bartek 25, robbed him, and shot him twice on Dec. 31, 2021, the Cuyahoga County Prosecutor’s Office in Ohio said. Following the homicide, she fled in his vehicle. Bartek was rushed to a nearby hospital where he was pronounced dead, Law Officer previously reported.

The stolen vehicle switched hands. Responding officers soon located the automobile and a pursuit took place. The chase ended ended on East 260th Street and Lakeshore Boulevard in the city of Euclid where 29-year-old Anthony Butler was arrested. McLoyd was later taken taken into custody as the investigation unfolded.

Today a jury found Tamara McLoyd, 19, guilty for carjacking a 27-year-old male on Christmas Day and killing 25-year-old Cleveland Police Officer Shane Bartek on New Year’s Eve in 2021. Sentencing will be at a later date. pic.twitter.com/Lq9aJfkp6m

Surveillance footage showed the fatal confrontation between McLoyd and Bartek in an apartment complex parking lot. She later confessed to investigators that she robbed and shot the off-duty officer, Law&Crime reported.

Trial testimony showed DNA linked her to a gun found with her in a vehicle during her arrest, although it was unclear if this was the actual murder weapon.

McLoyd was not only convicted of the crimes committed against Bartek, but of a separate carjacking at the same apartment complex that occurred on Christmas Day.

Cuyahoga County Prosecutor Michael C. O’Malley said that McLoyd chose a life of violence and was held accountable for her crimes. Her sentencing is pending as she has additional open cases for aggravated robbery.

“Tamara McLoyd chose a life of violence and her senseless decisions tragically cost Officer Shane Bartek his life on New Year’s Eve,” O’Malley said. “Today, Ms. McLoyd was held accountable for her selfish actions. Our thoughts remain with Officer Bartek’s family, friends, and fellow officers and we hope this guilty verdict provides them with some semblance of peace. She still has four more Aggravated Robbery cases pending.”

Anthony Butler, 28, pleaded guilty to the unauthorized use of a motor vehicle on December 19 & receiving a stolen vehicle registered to CPD Officer Shane Bartek on December 31, 2021. He was sentenced to 3 years in prison. Def. Tamara McLoyd’s next court action is July 25 at 9 a.m pic.twitter.com/yv5Y5N3Wzy

Bartek was a 2-year veteran of the Cleveland Division of Police. Sorrow from his death was felt by many, Law Officer reported.

Following the murder, Chief Wayne Drummond said, “My heart is aching for the family, for our officers. Senseless. It just doesn’t make any sense.”

Officer Shane Bartek was only 25 years old, but his life and service made a difference in the lives of so many. Raised in Middleburg, Shane will be remembered for his optimism, his care for others, and his love of Cleveland. Our prayers are with his family and all who knew him. https://t.co/heA10VqSZz pic.twitter.com/Nce91GWWny

“We are devastated by this news and are asking for prayers,” Cleveland Police Union President Jeff Follmer said at the time.

“This evening is about the family of this slain officer that we lost today. I just ask the residents of Cleveland to keep the family in their prayers,” Mayor Justin Bibb said as the news spread. “Let’s all stay vigilant this evening. Stay safe and healthy. I also want to thank all members of law enforcement who supported us this evening.”

It was the second line-of-duty-death for the extended Bartek family.

“A retired Cleveland police officer says she was stressed on Friday when hearing the news that an officer was killed after previously experiencing the line-of-duty death of her son in 2017. Then her worst fear came true when she discovered the deceased officer (Bartek) was her cousin’s son,” Law Officer previously reported.

Jacqueline Ketterer comes from a family of cops, and she also retired from the Cleveland Division of Police. Her son, Cleveland Police Officer David Fahey Jr. was killed in 2017 by a hit and run driver when he was assisting at the scene of a traffic fatality on I-90.