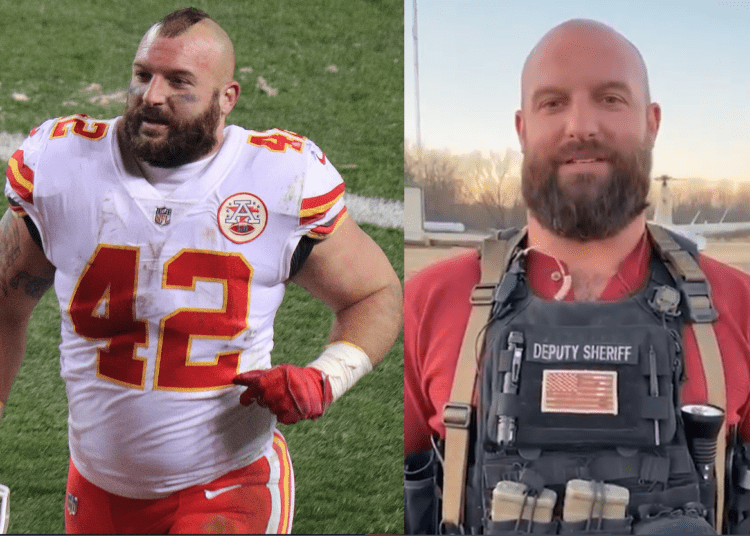 Anthony Sherman played in the NFL for 10 years and was a Super Bowl champion as a member of the Kansas City Chiefs. He recently exchanged his football jersey for the attire of a sheriff”s deputy in Bourbon County, Kansas , according to the Daily Wire.

Sherman was a fan of Live PD. He and several teammates routinely watched the broadcast every Saturday before games, including the night prior to their Super Bowl LIV victory in 2020, Law Officer reported.

In a retirement video posted to Twitter earlier this month, Sherman wore his deputy sheriff’s tactical vest while thanking fans and supporters in Kansas City for the eight years he spent playing there.

Sherman and former Live PD analyst Sean “Sticks” Larkin aired out their frustrations over the show being taken off the air during Law & Crime’s “Coptales and Cocktails” podcast on Thursday.

Sherman said the NFL’s COVID-19 policies and turn toward “woke” politics influenced his decision to retire from professional football. He achieved his goal of playing in the NFL for 10 years, and “the Lord showed [him] the door” when the NFL started to take overt political stances as a league.

“Do you miss it?” Larkin asked.

“I don’t,” Sherman replied. “My goal was 10 [years], and I got 10. And the Lord showed me the door with all of the political stances the NFL was making, the COVID policies, all of this nonsense. He was like, ‘Hey, I’m going to make it easy for you. I gave you 10 and then head on down the road.’ And then he opened up another door with all this law enforcement stuff. And it’s been a good transition so far.”

Larkin also asked Sherman about his experience being a vocal supporter of law enforcement as the NFL has focused on social justice issues along with anti-police statements being made by so many in the NFL and celebrities in general.

The former ball player said his views were respected and largely not controversial within the Chiefs locker room, the Daily Wire reported.

“I kind of had one of those, like, ‘this is who Sherman was, this who Sherman is, like, leave him alone,’” Sherman said. “He’s going to have his opinion, and he’s not going to change his mind about it — any aspect of that. I kind of demanded — not demanded, but had a respect in the locker room, that it wasn’t, ‘Oh, geez, here comes Sherman,’ whatever. It was kind of one of those things where it was, I am who I am, and if you don’t like it, then we don’t have to talk. I’ve got my friends. I don’t need many more.”

Sherman added that the team as a whole was unified and focused on success on the field.

“The locker room was great,” the 10-year NFL veteran said. “Coach [Andy] Reid and [General Manager Brett] Veach did a great job of bringing in guys. And that’s one of the things I think is the reason they’ve had so much success in the last four or five years. One, Patrick Mahomes. Two is the locker room itself. Everyone loves each other regardless of where you grew up, how you grew up, where you went to school, whatever it is. We have one goal and it’s to win the Super Bowl, and I don’t care what has to happen, but we’re gonna do it, we’re gonna accomplish it together.”

During his 10-year NFL career, Sherman played fullback for with the Arizona Cardinals and Kansas City Chiefs.

He was drafted by the Cardinals in the fifth round of the 2011 NFL Draft. He played college football at the University of Connecticut.

Sherman isn’t the first NFL player to make the jump to law enforcement. Former cornerback Charles “Peanut” Tillman had a long, productive career with the Chicago Bears. After retiring from the NFL, Tillman joined the FBI in 2018.