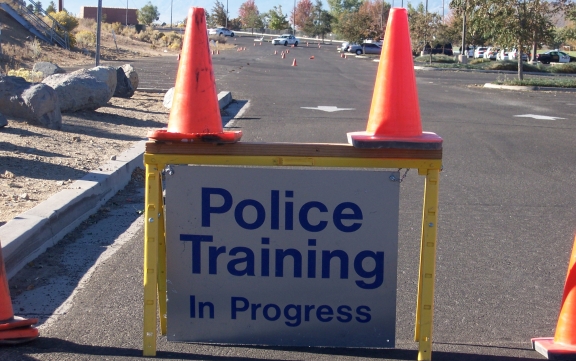 A Stockton (CA) Police officer is in stable condition after being shot during a training exercise on Wednesday.

According to the report, police were training in a tow yard in the 2300 block of N. Wilson Way when the officer was accidentally shot by another officer participating in the exercise.

ABC10 reports that the officer’s injury is considered non-life-threatening, but police did not say where they were struck.

Training Accident: Today officers were training at a tow yard in the 2300 blk of N. Wilson Wy. During an exercise, an officer accidentally shot another officer. The injured officer was transported to an area hospital w/nlt injuries. This incident is under administrative review. pic.twitter.com/kPVIlEgKh4

The following dispatch audio describes the first reports of the shooting:

Dispatcher: “…attention all cars… receiving a report of a 9-11 officer-involved…Anderson Tow…20-51…”

Dispatcher: “…units to break in response…Channel one…”

Officer: “…nobody else come up code three…can we get clarification on the OIS please….”

Dispatcher: “…we’re trying to get that now…”

Officer: “…there’s no outstanding suspect at this time…”

Officer: “…it’s going to be a GSW to the left shoulder…officer’s alert and conscious…”

Officer: “…this was a training accident…”

Authorities did not say what training exercise was being performed. Neither officer has been identified.

This incident is currently under administrative review, police said.

Share and speak up for justice, law & order...
Tags: accidentCaliforniadischargepolicestocktonTraining