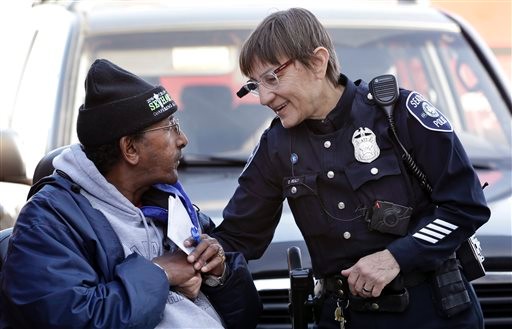 IOWA CITY, Iowa (AP) — State legislators are pushing to make it much harder to release police officer body camera videos, undermining their promise as a tool people can use to hold law enforcement accountable.

Lawmakers in at least 15 states have introduced bills to exempt video recordings of police encounters with citizens from state public records laws, or to limit what can be made public.

Their stated motive: preserving the privacy of people being videotaped, and saving considerable time and money that would need to be spent on public information requests as the technology quickly becomes more widely used.

Advocates for open government and civil rights are alarmed.

Police departments nationwide are already spending millions to outfit officers with cameras and archive the results. In this latest clash between the people's right to know and government authority, the responsibility to record controversial encounters, retain copies and decide what to make public mostly rests with the same police.

Absent public records protections, these police decisions can be unilateral and final in many cases.

"It undercuts the whole purpose of the cameras," said Michelle Richardson, public policy director of the American Civil Liberties Union of Florida.

"People behave better on film, whether it's the police or the suspect, because they realize others are going to see them. When you take away that possible consequence, you really undercut the oversight value of these," she said.

Supporters say the privacy rights of crime victims and witnesses need protecting, and that police need to limit the broad and costly public records requests they're getting. Routinely releasing these videos will deter people from calling for help and cooperating with police, they say.

"Public safety trumps transparency," said Kansas state Sen. Greg Smith, a Republican. "It's not trying to hide something. It's making sure we're not releasing information that's going to get other people hurt."

The Kansas Senate voted 40-0 last month to exempt the recordings from the state's open records act. Police would only have to release them to people who are the subject of the recordings and their representatives, and could charge them a viewing fee. Kansas police also would be able to release videos at their own discretion.

Even some supporters of privacy restrictions agree that barring extraordinary circumstances or a court order, police could exercise too much unilateral authority over what gets seen.

"I think it's a fair concern and a fair criticism that people might cherry pick and release only the ones that show them in a favorable light," said former Charlotte, North Carolina, police chief Darrel Stephens, executive director of the Major Cities Chiefs Association. "Transparency is the best policy, but you have to be thoughtful about what you are releasing because of the potential impact and unintended consequences."

Most proposals would generally grant access to the people being recorded. Bills in Oregon and Utah are among those that would preserve a presumption of openness in situations involving police use of force or allegations of misconduct.

Still, police know they'll be accused of holding back incriminating evidence against their officers, even when none exists because cameras weren't turned on or videos were accidentally erased. Initial studies in some cities have shown that individual officers often fail to turn on cameras when using force.

"That's going to be an issue," said Major County Sheriffs Association President Donny Youngblood. "We don't erase videos. We don't alter videos… but not everyone in the public believes that."

Existing state disclosure laws typically provide exemptions for ongoing criminal and personnel investigations. Open government advocates say the privacy challenges of body camera videos can be addressed within those laws — for example by editing out or blurring identifying details before videos are made public.

But the White House, through the Task Force on 21st Century Policing it created in the wake of violence in Ferguson, Missouri, suggested new restrictions this month, despite President Barack Obama's promise that the videos would improve transparency in policing.

The task force warned that releasing videos showing use of force, "even when lawful and appropriate," can undermine trust in police, and that images showing minors and graphic events raise concerns. It said public-records laws need updating to protect the privacy of people in these recordings.

Obama has proposed a $75 million program to help agencies buy the cameras.

But the desire for transparency is colliding against competing interests in state legislatures.

A bill approved by Arizona's Senate this month is among the most hostile to public access.

It would strip the public's ability to review "the most reliable, contemporaneous records" of police conduct, Phoenix lawyer David Bodney complained.

"Why would we adopt an enhanced form of documentation of law enforcement activity, only to forbid public inspection of those documents? It's nonsensical," said Bodney, who is lobbying against the bill on behalf of The Arizona Republic newspaper and a local NBC affiliate.

The bill declares that body camera recordings are not public records, and as such can be released only if the public interest "outweighs the interests of privacy or confidentiality or the best interests of the state."

That wording would make getting a court order very difficult, Bodney said.

Its sponsor, Arizona Republican Sen. John Kavanagh, said that without such protections, unscrupulous website operators could post compromising videos of people and extort payments to remove them.

"Every time there is a victim of a violent crime, they'll want the video and they will post pictures of the distraught, crying crime victim that's on the camera," he said.

Florida's legislation says body camera recordings could "be used for criminal purposes if they were available upon request," and exempts places where people have a "reasonable expectation of privacy."

"We do not want the voyeuristic public requesting video of the inside of someone's house," said its sponsor, Florida Democrat Christopher Smith.

A bill in Washington state, approved in a House committee, requires people who don't appear in videos to get a court order to see them. Otherwise, said Rep. Drew Hansen, a Democrat, the public records law would permit "broad distribution of very, very intimate, sensitive footage."

"It was a very painful lesson for us," Cook told lawmakers. "We found that the staff time necessary and the cost involved for review, redaction and release prevented us from providing a fully funded program."