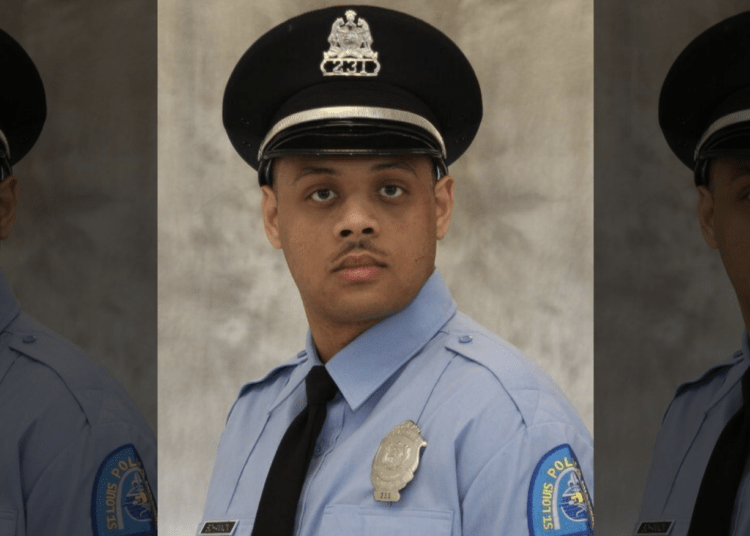 St. Louis police officer Tamarris L. Bohannon, 29, who was shot in the head died Sunday, Aug. 30, 2020 after responding to a shooting on the city's south side. (St. Louis Metropolitan Police Department)

ST. LOUIS — Tamarris L. Bohannon, the police officer in St. Louis who was shot in the head Saturday responding to a barricade situation, died from his injuries Sunday, investigators said.

The 29-year-old officer was survived by his wife and three children. His family penned a letter posted on Twitter by the police department that called him a “hero to many but most importantly to his loving wife and three incredible children,” FOX reported.

“The loss of this great man is felt deeply within the St. Louis community and we ask for your prayers and support in the days ahead,” the letter read.

Bohannon and another officer were shot when they responded to a shooting call in the Tower Grove South neighborhood around 6 p.m. on Saturday. A man had barricaded himself inside a home and fired at police.

The second officer, 30, who was shot in the leg, was treated and released after the shooting, St. Louis Police Department spokeswoman Officer Michelle Woodling said. The officer had been on the force for about six months.

While they were looking for a victim and a suspect, they heard gunfire and a 29-year-old officer was shot in the head and is in “very” critical condition, Hayden said. The gunman then shot another officer in the leg as he and others were going to assist the first officer, Law Officer reported.

Both officers were rushed to area hospitals.

“These officers, all they’re trying to do is their job and try to help a person who’s wounded and they come under fire themselves,” Hayden said. “The officer who’s most critically injured, pray for him.”

The officer who was critically injured remained in surgery late Saturday night.

According to the chief, the suspect ordered a couple out of their home and barricaded inside. Investigators negotiated for hours before taking the gunman into custody around 4:45 a.m. Sunday.

The officer shot in the head has 3.5 years of experience on the force. The second officer, has one year experience. He is also around the same age as the critically injured officer, 29.

Hayden said the department has had eight officers shot in the line of duty since early June.

“Our officers have been going through a lot this summer,” Hayden said to reporters outside St. Louis University Hospital. “We’ve had a surge in violence.”

Governor Mike Parson, St. Louis Mayor Lyda Krewson and other local officials said they are keeping the officers in their prayers and are monitoring the situation as it develops, KMOV reported.

Two @SLMPD officers were shot by a gunman tonight while protecting St. Louis citizens, and they are now hospitalized. Teresa & I are praying for the officers and their families. Chief Hayden said this makes eight STL officers shot since June. This violence must end! #BackTheBlue https://t.co/bT97CdfBHY

Echoing Krewson and Parson, the U.S. attorney for the Eastern District of Missouri Jeff Jensen said his team is aware of the shooting involving two SLMPD officers.

“We offer thoughts and prayers to the officers and their families. I, along with the men and women of this office, stand ready to help local law enforcement if needed,” Jensen said.

The shooting happened the same day widow of retired Police Captain David Dorn led a march in the city calling for peace and healing. Dorn was shot and left to die outside a pawn shop early June by violent looters.