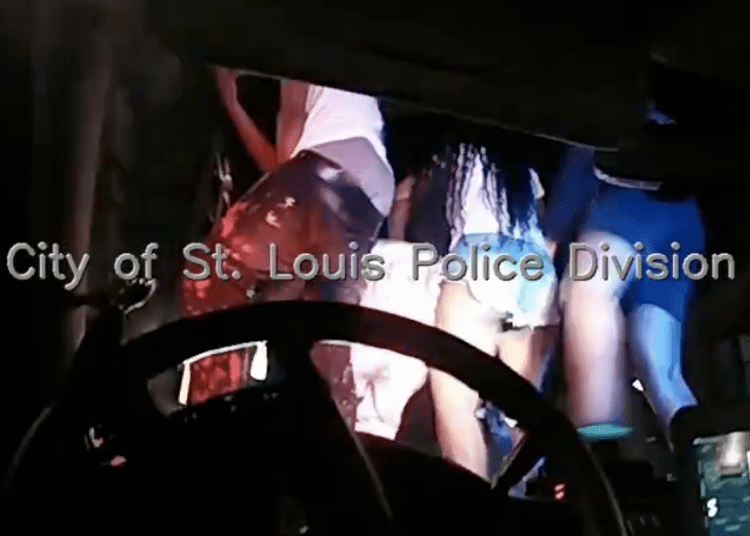 ST. LOUIS — A St. Louis police officer put out a call for help as partygoers danced on top of the police trapping the officer inside. Now, the St. Louis Police are asking the public for help to identify members of the mob who swarmed the vehicle while officers were responding in the area to disperse a party.

The St. Louis Metropolitan Police Department received a total of 13 calls around 2:30 a.m. Sunday morning for a large party on the top floor of an apartment building, according to a police spokesperson. As responding officers attempted to break up the crowd of more than 100 revelers, they began to congregate outside the building, Fox 2 St. Louis reported.

Here is a clip from the body worn camera of the officer who was inside the vehicle.

But after breaking up the party inside, the crowd made its way outside, where some people soon began climbing and jumping on the police unit. As the disrespectful crowd danced on the department’s car, an officer remained inside, according to scenes caught on video and shared by the department, Fox reported.

At one point, someone was able to open the passenger-side door of the police vehicle. That move prompted a city-wide “Officer in need of aid” call and more officers responded.

As police flooded the area, the crowd finally dispersed, according to Fox 2. While the group of partygoers meandered away, gunshots went off nearby, although no one was injured, police said. SLMPD said the police unit received “substantial” damage. Fortunately, the officer was not injured.