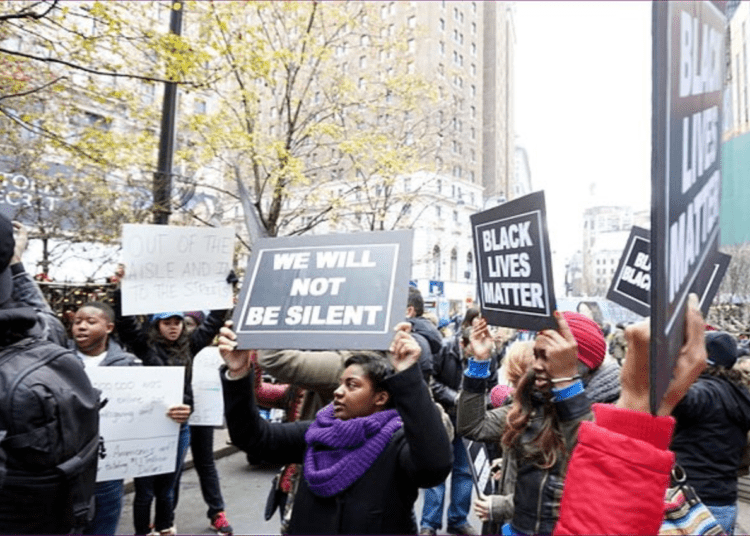 BLM Protesters in NYC. (Image via the National Police Association)

Many stories about wrongly accused police officers come down to a straightforward question: What else could the officer have reasonably done? Unfortunately, we must insert “reasonably” because, guaranteed, there’s someone out there who’d suggest some equivalent to the “Hollywood” option: “He should have shot the gun out of the bad guy’s hand.” Cops don’t need people like that as judges or on juries. Civilians don’t either.

Kim Potter in Minnesota is an example. She made a tragic mistake. No one seems to argue that. Nevertheless, a jury convicted her, and she sits in jail—having not committed a crime.

There was also Oklahoma police Lt. John Mitchell, who shot and killed a mobile (driving a vehicle) active shooter whose targets included her mother and the police. Fortunately, he has not been convicted—yet. This incident originally took place in 2019.

In another incident, an officer fought with, and had to finally shoot, a resisting suspect who’d grabbed the officer’s Taser and wouldn’t let go. He’s being prosecuted.

And there was the cop who shot and killed a suspect who was viciously assaulting a woman in a store. A round went through a dressing room wall and struck and killed a teenaged innocent bystander hiding on the other side. Rather than the criminal, the prosecutors decided to hold the cop accountable, charging him criminally.

These woke prosecutors also prosecute civilians who’ve committed no crimes. The St. Louis Circuit Attorney, Kim Gardner, targeted Patricia and Mark McCloskey, charging them with crimes for defending themselves and their home against a violent BLM mob who’d allegedly threatened their property and lives (and dog). The same prosecutor did not charge any suspects in the mob for the threats or property damage allegedly committed.

Another high-profile civilian case of probable malicious prosecution was Kyle Rittenhouse, who was eventually, correctly acquitted. It was such an over-the-top case of self-defense the prosecution attempted to universally alter American equal justice, by trying to convict a victim of several crimes he did not commit.

Now, we have another case of a civilian targeted by prosecutors in Manhattan where George Soros-funded, cop-hating, prosecutor, Alvin Bragg is DA. This incident is so clearly a case of self-defense that anyone who even casually attempts to ask themselves, “what would I have done,” understands, as ugly as this was, there doesn’t seem to be any evidence the woman in question committed a crime, though there’s evidence suspects committed crimes against her.

This example is making more than ripples because of this woman’s staunch refusal to submit and make a plea deal with the prosecutor even though it appears to be for an incredibly light sentence.

It’s essential for everyone, cops and civilians, to understand the importance of standing up for yourself against some prosecutors’ moral corruption. This is what Kathleen Casillo is doing after the harrowing life-or-death confrontation she and her daughter managed to escape, during the 2020 BLM/Antifa riots.

As the Daily Mail reported,

A New York City mother-of-three who plowed her BMW into a group of BLM protesters in 2020 has yet again refused a plea deal in favor of a jury trial.

Kathleen Casillo, 54, appeared in Manhattan Criminal Court on Tuesday, nearly two years after she was accused of driving into pedestrians during the protest at the Manhattan intersection of 39th Street and Third Avenue on December 11, 2020.

Casillo could face seven years in prison after turning down the deal which involved six hours of community service and a one-year license suspension.

Casillo and her attorney told the court that they did not have an interest in the plea deal and would opt for a jury trial.

This incident was captured on video, so the context is obvious. Casillo was driving in New York City with her adult daughter in the front passenger seat. Suddenly, BLM thugs surrounded and began pounding on her car and trying to block her from moving. These are all crimes.

Casillo said they “called her a ‘white privilege b**ch’ before banging on the vehicle.”

When the rioters tried to open her car doors, she said she “panicked and hit the gas….” Nine activists were reported injured in the incident.

Now, let’s get out of the way that some people she struck weren’t directly involved in the initial confrontation. Their injuries were an unfortunate consequence of choosing to participate in a protest with people known for committing violence. Regardless, it was the activists who shoved over the first domino, not Casillo or her daughter.

Like with cops, prosecutors try to make civilians using self-defense, such as in this case, responsible for a criminal’s wrongdoing. But, unlike cops, the activists can’t argue the civilian wasn’t adequately trained. Civilians aren’t trained what to do if a mob attacks them, However, God implanted in all of us a survival instinct, which the U.S. Constitution recognizes with the right to life and to protect that life.

The normal human being’s response to a life-threatening situation is fight or flight (something instructors try to train out of police officers, or, at least, train them to fight despite the instinct). With her daughter in the car, this mother rightly chose flight (or to use her car to fight).

The Tatum Report wrote, “Picture this: You’re a woman driving in New York City with your adult daughter. Suddenly, you’re swarmed by a violent BLM/Antifa-supporting militia, trying to break your car windows and block your path. What would you do?”

This is the crux of this article: What would you do?

Whether you’re a cop or civilian, and whether you support what Casillo did, if you wouldn’t do what she did, what would you do differently? What would be flashing through your mind as angry people banged on your car windows?

If you were around during the L.A. riots in 1992 (which the 54-year-old Casillo was), you might have a TV news image of Reginald Denny passing through your mind. He’s the truck driver dragged from his rig and nearly beaten to death by animals, during the Rodney King riots.

Incidentally, victims may also consider the support these thugs get from some leftist politicians. Would the system even prosecute the criminals, if they assaulted her and her daughter? Sickeningly, according to the New York Post, U.S. Rep. Maxine Waters (D-CA) infamously embraced the man who was seen slamming a concrete block into Denny’s head and then doing a victory dance over the helpless, bloody man who very well could have been dead after that cruel blow.

Or, recently, what about the man who was pulled from his vehicle after crashing into a tree in Portland, Oregon? The BLM/Antifa mob beat him, knocking him to the ground. And while he sat on the street, a thug ran up and with full force football kicked him in the head. After collapsing on the pavement, the victim lay motionless.

This is the reality, old and new, of radical leftist street violence. And this was the reality Casillo faced. The only realistic options she had were to escape and risk unintentionally injuring protesters or stay there where the mob would likely drag her and her daughter from her car and then beaten or even murdered.

If you have another suggestion, like calmly discussing the situation with a violent mob, ask yourself if it’s something you’d have to bet your life on because that’s what you would’ve been doing?

What other reasonable options did Casillo have? Bet their lives that a leftist militia with a history of street violence, including murder, wouldn’t harm them? Who would take that bet?

Either Casillo uses her car to escape the mob, or her family could have read about a violent mob dragging their loved ones from their car and beating or even killing them. Casillo prudently made the first choice and lived to tell her story to a jury, albeit during a malicious prosecution.

This is why she’s refusing to take an ‘easy’ plea deal. Casillo says, I’m going to court to clear my name because I’m not guilty.

Lawyer Mark Geragos, on FOX News, told Jesse Watters, ‘There is an old adage… If they offer you probation and no time, that means they have got no case [that’s what they offered her].’

The members of any jury will ask themselves, ‘What would I do?’

Situations like Casillo’s should help the public, civilians, understand what cops are facing with anti-police officials in too many prosecutor’s offices. It’s not only the cops these immoral officials target but also civilians trying to defend themselves from the thugs the radical leftist prosecutors work hard to protect.