Sister of Dayton Gunman Among the Dead 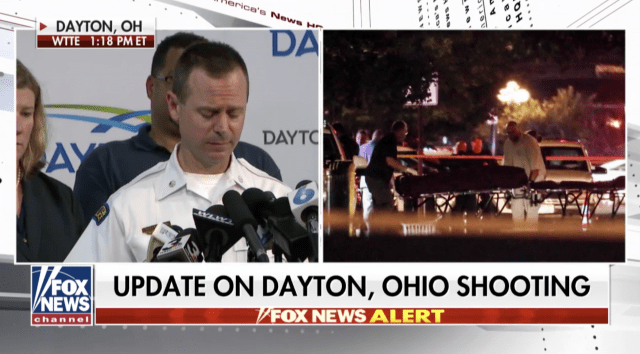 DAYTON, Ohio – The sister of the gunman in the deadly rampage in Dayton, Ohio was among the nine killed during the early-morning shooting in a popular nightlife area that left dozens injured, officials revealed Sunday.

Dayton Deputy Director and Assistant Chief of Police Lt. Col. Matt Carper identified the gunman as 24-year-old Connor Betts. His sister, 22-year-old Megan Betts, was among the nine killed, according to Carper, who added that all of those killed during the rampage were shot in the city’s Oregon District around Fifth Street, Fox News reported.

Betts was killed by police less than a minute after he opened fire with a .223-caliber rifle in the streets of the Oregon District around 1 a.m. Sunday in the second U.S. mass shooting in less than 24 hours after at least 20 people were slain in El Paso, Texas.

“This is a heartbreaking tragedy,” Ohio Gov. Mike DeWine told reporters at a news conference Sunday afternoon. “It is the type of tragedy that you hope never comes to your state.”

Dayton Mayor Nan Whaley said the gunman was wearing body armor and had additional high-capacity magazines.  The Oregon District was filled with “thousands” of people out on a weekend night at the time, according to Whaley. Officers were also stationed in the neighborhood and were able to halt the rampage less than a minute after it began, the mayor added.

“If Dayton police had not gotten to the shooter in under a minute — and figure that 26 injured, 9 dead — hundreds of people in the Oregon District could be dead today,” Whaley told reporters.

Whaley said at least 27 people were treated for injuries, and at least 15 of those have been released. Several more remain in serious or critical condition, local hospital officials said at a news conference.

Carper said that officers successfully interceded and killed the homicidal suspect before he could wreak more havoc.

“This is extremely unusual, obviously, for any community, let alone Dayton,” Carper told reporters. “In our Oregon District, this is unheard of.”

The Oregon District is a historic neighborhood that Carper described as “a safe part of downtown,” home to entertainment options, including bars, restaurants, and theaters. The shooting took place outside, on the 400-block of East 5th Street. All of the fatalities were reported outside, according to police.

Abandoned shoes were seen in the area of the shooting — left behind as panicking people fled. Police tape could be seen on Sunday morning near a pile of shoes outside the bar where the gunfire erupted.

Authorities descended on a neighborhood in Bellbrook, located about 16 miles south of the shooting scene, as they executed a search warrant in connection to the deadly shooting, Dayton 24/7 Now reported. Bellbrook Police Chief Doug Doherty told the television station the search was to “obtain information tied to the shooting in Dayton.”

Bellbrook Police tell us they are searching a home in connection to Oregon District shooting. No word on who lives here or what evidence was collected. @dayton247now pic.twitter.com/lIGfgErFUk

Dayton 24/7 Now spoke with Brad Howard who knew Betts, he said the two talked a lot about music and pop culture. When he heard the news this morning he couldn’t believe it. “You wake up and you hear it, I had a bunch of missed calls. I opened my phone and it’s just another one of those things. It’s a kick in the teeth.”

Dayton 24/7 Now spoke with other classmates of Betts’ who said he was expelled from school after officials found a notebook where he reportedly wrote a list of people who he wanted to rape, kill and skin their bodies. The classmate we spoke with said Betts was supposed to write a letter of apology to the people on the list. After being expelled, Betts was allowed back to school, according to the classmate. The classmate added Betts was not a loner, but had friends.

President Donald Trump has ordered flags at half-staff in remembrance of the victims of two mass shootings in less than a day, which killed at least 29 people. A proclamation released by the White House on Sunday said the nation shares “in the pain and suffering of all those who were injured in these two senseless attacks.”

The first attack Saturday at a shopping area in El Paso, Texas, killed at least 20 people. That was followed by another shooting in a nightlife district in Dayton, Ohio, which claimed nine lives.