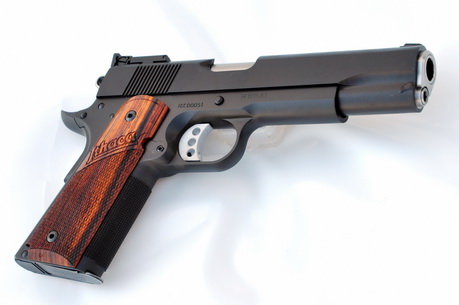 As a kid, my first intro to the 1911 was an Ithaca WWII 1943 model. The Ithaca brand is again producing high quality 1911’s.  I spoke with their lead gunsmith Bryan Stoops and he detailed the current models including 5 inch barrel carry and target models. His practiced eye goes over each pistol and he clearly knows his stuff. Overall fit and finish is excellent. Also offered is a 1911 build kit that includes a fully machined frame, slide, and barrel ready for final fitting. I hope to get a sample pistol for testing and report.

Great products that I use daily. Their display was huge and the number of variations shown in the photos. If you are a 1911 user, check out the thin grip version with Frag pattern. This is my carry set up and is unmatched for comfort, fit, and gripability.

The Frag pattern came about by way of my BFF master gunsmith Ned Christiansen of Michiguns fame. As I was standing at the VZ display I saw Brother Henk Iverson in deep discussion with two of our finest gunsmiths, Mark Graff and Stan Chen. Henk is like family to me and has done more for our law enforcement firearms and combatives training than I can express.

We have trained with Henk for years and his word is solid on guns and gear. He immediatley grabbed an AR forend that VZ developed. Check out the photo. It is very lighweight and has aggressive grip panels similar to their handgun grip patterns.

The market for AR’s is extraordinary. The rifle and carbine versions in every aspect and design feature are being built for law enforcement, citizen defense, and sporting purposes by numerous manufacturers. An upcoming review will focus on and about the lightweight models. Both patrol officers and SWAT have told me that they want lighter AR rifles and carbines. By the time we add optics, lights, and other accessories, a standard M-4 configured carbine can be well over 8 pounds. Whenyou have to carry that amount of weight around your neck and in your arms for an extended time, every extra ounce matters. We are currently testing the 5 pound Robar PolymAR-15 that is an all polymer upper and lower receiver matched to a Gunner barrel and all

component parts given their superior NP3 treatment. I met with long time friend, Robar general manager Freddie Blish who also previewed the same rifle with titanium parts and bolt carrier that brings the rifle down to 4.5 lbs. Freddie tells me that they have two rifle with over 60,000 rounds through them and there is no failure or extreme wear on the upper or lower. I also met with Freddie’s plastics/mold master who designed the upper and lower. He explained that all metal parts for the upper and lower receivers are designed so that when molded they cannot come loose from the body of the receiver. The hammer and trigger pins are fit into steel tubular bushings, as shown in the photograph.  This may well be the future of lightweight AR rifle building.

Continuing the bantam weight review, I met with Daniels Defense and looked at their V7 Model weighing in at just over 6 pounds. This is the traditional aluminum receiver and as the photo shows that DD also makes high quality gear and they will be sending a sample.

I then located both LMT and Troy regarding their lightweight versions, and look to include them in the test series.

I am looking forward to this project. If lighweight rifles can offer the type of performance we demand, then we will shed some pounds.