'Both occupants of the pickup truck had been ejected from the vehicle and were hypothermic and seriously injured,' police say 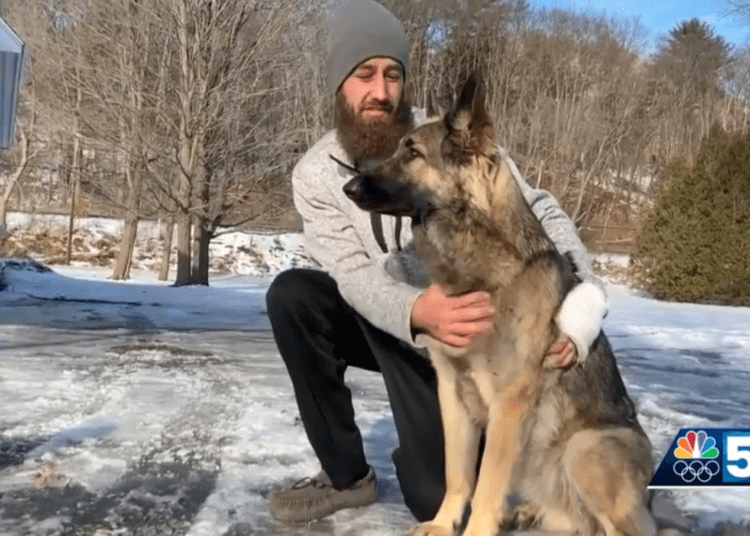 LEBANON, N.H. — A Shiloh Shepherd named Tinsley is being hailed a hero after she led police to the mangled truck her owner had been driving with a friend when he crashed, according to reports.

Responding units found the dog, but when they tried to get close, she refused to be cornered and continued to run northbound and crossed over the state line into Vermont.

“Almost alerting them to what was off the roadway,” Lt. Daniel Baldassarre of New Hampshire State Police told NBC5 of the dog’s behavior.

Fortunately, Tinsley was assertive and a short time later, police discovered a damaged section of the guardrail near the I-89 and I-91 junction.

According to New Hampshire State Police, officers then “observed a badly damaged pickup truck that had rolled over.”

“As the officers investigated further, they realized that both occupants of the pickup truck had been ejected from the vehicle and were hypothermic and seriously injured,” State Police said.

One of those men, Cam Laundry, 31, was later identified as Tinsley’s owner. She is a one-year-old Shiloh Shepherd, which is a breed very similar to a German Shepherd, Yahoo News reported.

Laundry told several news outlets that he was knocked out when the truck rolled and he was thrown from the vehicle.

“It’s honestly remarkable,” Laundry told local news NBC5. “She’s my little guardian angel, you know? It’s a miracle that she had that kind of intelligence to do what she did.”

Tinsley was incredibly well-behaved after leading police to the injured men, authorities said when questioned about the remarkable circumstances on Tuesday.

“The whole time we were starting our patient care, it sat there nice and calm right next to its owner,” Captain Jack Hedges of Hartford Fire Department told NBC5.

Lebanon Police Chief Phillip Roberts said he is impressed with Tinsley resolve in the situation.

“We’ve had, you know, a lot of amazing stories with our trained K9s and stuff, but not for just a household pet to lead you down that road and play a role in saving some lives,” Roberts told NBC 10.

The weather in Lebanon on the night of the crash was extremely cold. The high temperature on Monday reached 22 degrees and the low for the day was 11, which is just about average for this time of year.

Both men were taken to Dartmouth Hitchcock Medical Center for treatment.

There was a second dog with the men at the time of the collision. The passenger’s bulldog escaped injury during the traumatic crash, but police said it was struck and killed by a vehicle as it roamed on the interstate afterward.

State troopers say Laundry faces a charge of DUI following the single vehicle collision. He thought he was okay to operate his truck. Obviously, he was wrong.

“It definitely was a wake-up call,” Laundry said during an interview as he expressed sadness over the loss of his friend’s dog, but noting he’s glad that he and his passenger weren’t hurt worse.

Laundry said Tinsley never leaves his side. “We’re always together; in that truck that got wrecked, she’s always my co-pilot. I’m just thankful she’s always with me,” Laundry said of his loyal companion, adding, “Everybody loves Tinsley!”

Lebanon is located in far western New Hampshire, right on the border with Vermont, about 125 miles northwest of Boston.