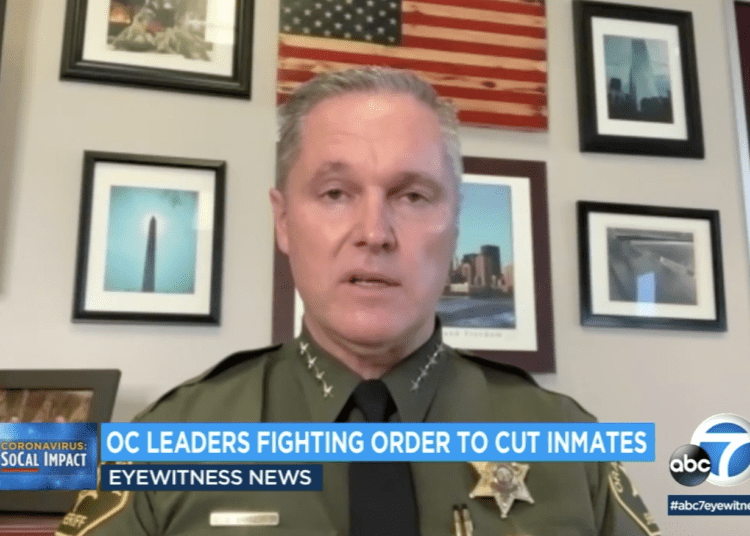 SANTA ANA, Calif. — The sheriff in Orange County, Calif., is fighting a court order aimed at slashing the population of inmates in the county due to the coronavirus.

Sheriff Don Barnes pushed back against the Orange County Superior Court, which ordered the reduction of the county’s jail populations by 50% on Friday in an effort to achieve proper social distancing and prevent further spread of COVID-19, KABC News reported.

The order stems from an ACLU lawsuit filed on behalf of inmates.

“Public safety does not just mean crime,” said Jacob Reisberg with the ACLU. “Public safety also means, is there a hospital bed open if you get sick?”

In the order, Judge Peter Wilson wrote that Barnes’ “deliberate indifference to the substantial risk of serious harm from COVID-19 infection to … medically vulnerable people in [his] custody violates their rights,” according to KCAL.

The sheriff announced an outbreak with 138 cases on Friday – jumping to 416 by Monday. He says it’s high because they’re testing everyone in the jail, even those who are asymptomatic – something that’s not being done in the general public.

Barnes notes that inmates at times may be mixing with the general public outside the jails.

“We have inmates who are participating in different practices. Either going to medical appointments or going to court or meeting with their attorneys. These people are all from the general public and we know there’s a surge within the general public.”

District Attorney Todd Spitzer supports the position of the sheriff. He says the surge in the jails mirrors the trends in the county as a whole.

“Why does anybody think that what’s going on in our jails is not gonna be a mirror image of what’s already happening on the outside?” Spitzer said. “The numbers in the jail are not out of control or inflated as compared to what’s going on outside of our jails.”

Barnes and Spitzer argue that a release of 1,800 inmates would create more crime and more victims. Data from the DA’s office shows low-level offenders who were released early or on $0 bail during the pandemic have committed new crimes at nearly three times the normal rate, KABC reported.

“There’s no doubt it would jeopardize public safety because these are some of the worst of the worst,” Spitzer said.

Another issue is the actual release of inmates. While the sheriff’s department quarantines inmates when they are booked, that does not happen when they are released.

Last week Barnes made news when he said his deputies would not enforce the governor’s lockdown order, Law Officer reported. He explained that residents complying with state health orders will be a matter of “personal responsibility” and that his department will not be enforcing the new stay-at-home order recently issued by Gov. Gavin Newsom.

“The ever-changing nature of these orders, and the increase of COVID-19 case numbers bring additional uncertainty and stress to California residents,” said the sheriff.

“The Orange County Sheriff’s Department will remain consistent in our approach,” added Barnes. “Orange County Sheriff’s deputies will not be dispatched to, or respond to, calls for service to enforce compliance with face coverings, social gatherings, or stay-at-home orders only. Deputies will respond to calls for potential criminal behavior and for the protection of life and property. Our actions remain consistent with the protections of constitutional rights.”