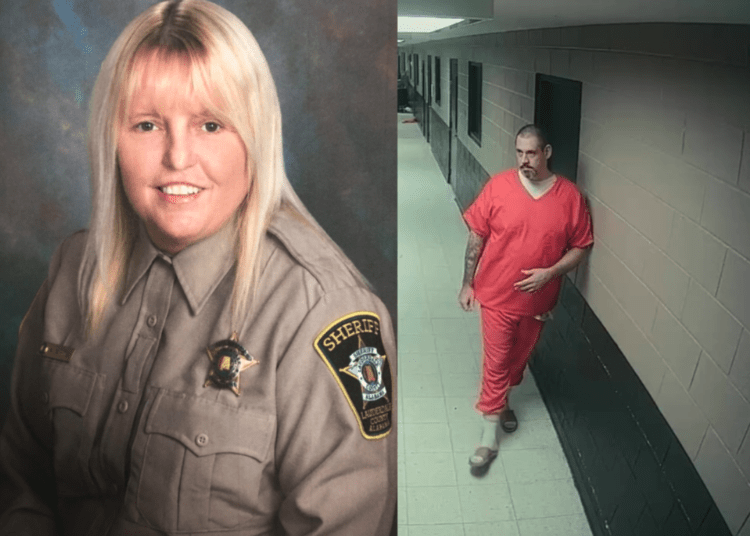 LAUDERDALE COUNTY, Ala. – Assistant Director of Corrections Vicki White of the Lauderdale County Sheriff’s Office was a well-respected member of the department in Alabama, according to those who worked with her over the years. Now she is a fugitive along with murder suspect Casey Cole White (no relation) after reportedly helping him escape from jail.

Sheriff Rick Singleton announced Monday that a criminal warrant has been issued for the longtime county official, Law&Crime reported.

“We know she participated,” said Sheriff Singleton, responding to a reporter’s question about whether the deputy was threatened into helping a murder suspect escape. “Now whether she did that willingly or if she was coerced, threatened somehow to participate in this escape, not really sure. But we know for sure, she did participate.”

AD White mysteriously vanished last Friday with inmate White, 38, who had been locked up at the jail in a capital murder case. He is accused of the fatally stabbing Connie Jane Ridgeway, 59, to death in a 2015 murder-for-hire plot. He is already serving a 75-year sentence for crimes spanning several states, according to AL.com.

In the update Monday, the sheriff suggested that AD White’s story about feeling under the weather was an “excuse” to buy more time when she didn’t return from what is now known to be a bogus court appointment for the inmate.

The charge against AD White is permitting or facilitating an escape in the first-degree.

Investigators are searching through video footage, phone calls, and “everything we have” to see if the two communicated prior to Friday.

“In her job, she was throughout the detention center,” the sheriff said. “On a regular basis, several times a day, walking the halls. So she had several opportunities each day to be in contact with any given inmate.”

It’s noteworthy that she sold her home about a month ago. The sheriff suggested she had cash at hand from the sale. They are also looking into whether the two had a romantic relationship, Law&Crime reported.

Those who knew AD White are reportedly stunned by the chain of events.

“Those of us who worked with Vicki White, and have worked with her for years, this is not the Vicki White we know by any stretch of the imagination,” Singleton said Monday. “She has been an exemplary employee. I was told by the director of the jail that Friday night, it was like you was in a funeral wake.”

U.S. Marshal Marty Keely of the Northern District of Alabama said both Vicki and Casey White were considered dangerous and were “in all probability” armed as he urged citizens to call authorities if spotting either one.

The U.S. Marshals are putting up a reward of up to $10,000 for information leading to inmate White’s capture. Keely emphasized during the press conference that the murder suspect is 6 foot, 9 inches tall. “Casey White would stand out at that height even if he changed his appearance,” Keely said.

LAUDERDALE COUNTY, Ala. – Law enforcement authorities are engaged in a manhunt in Alabama after an inmate charged with murder and a ranking corrections officer transporting him to court disappeared Friday morning, WVTM 13 reported.

Lauderdale County Sheriff’s Office Assistant Director of Corrections Vicki White along with inmate Casey Cole White (no relation) were last seen at about 9:30 a.m. when they left a detention center for a court appearance, the sheriff’s office said.

Sheriff’s officials said the transport vehicle was discovered in a parking lot in Florence about 11 a.m. Friday.

However, they were not aware that AD White and inmate White were missing until about 3:30 p.m. when he was not returned to jail. The booking officer attempted to contact AD White, but her phone was going straight to voicemail.

Investigators are combing through surveillance footage to determine where they may have gone, the New York Post reported.

In a news conference Friday evening, Lauderdale County Sheriff Rick Singleton said AD White, who is an employee of 25 years, told the booking officer at the detention center that she was escorting inmate White to the courthouse for a mental health evaluation.

AD White said she wasn’t feeling well, so planned to seek medical care for herself after dropping the inmate off with other deputies, WVTM reported.

The sheriff noted it is a “strict violation of policy” for inmates with those types of charges to be escorted anywhere by a single deputy, but they believe AD White wasn’t questioned because she is the head of operations and coordinates all transports.

“Knowing the inmate, I think [Officer White] is in danger whatever the circumstances,” Singleton said. “He was in jail for capital murder. He has nothing to lose.”

Casey White is charged with capital murder in the “brutal death” of Connie Ridgeway at her Rogersville home in 2015, according to court documents.

Officials confirmed the two never arrived at the courthouse. It has since been determined that the inmate did not have any evaluations scheduled.

“Did she assist him in escaping? That’s obviously a possibility,” Singleton said. “So we’re looking into that as one angle of the investigation — was she kidnapped en route to the courthouse and, you know, taken against her will?”