Seven-Year-Old Girl Dressed as Bumblebee Is Shot in Chicago … Who Cares? 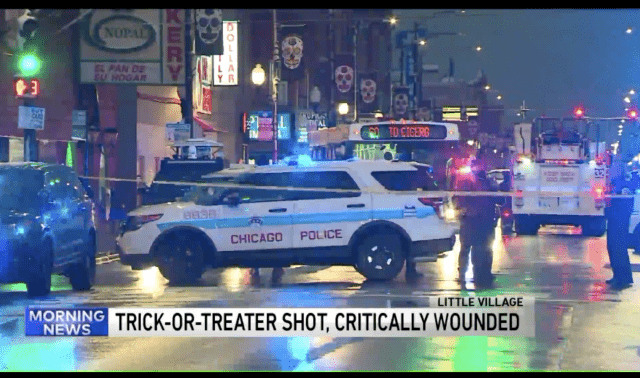 The little seven-year-old bumblebee stumbled down the street holding her catch of ‘trick or treat’ candy. She was stumbling not from the weight of her sweet haul, but from the gunshot wounds she sustained. But, don’t worry; shootings are down compared to last year’s reports according to the Chicago Police Department’s esteemed superintendent and the progressive mayor of our fair city.

In the meantime, police officers must immaculately justify every street stop they make, every time they decide to foot chase somebody who runs from them, and every time they pursue a car that refuses to stop for their blue lights and sirens.

The officers then must ensure that their vest cameras are on and that the squad car’s video and audio are recording, or discipline will follow. They must be flawlessly accurate on every report, even those following extremely traumatic incidents like fatal shootings or other life and death struggles.

Officers will be challenged by police supervisors, State’s Attorney, Civilian Office of Police Accountability, the Office of Inspector General, and possibly the Federal Government’s Office of Civil Rights or the FBI.

Their actions will be studied and examined to ensure they have conformed to all the recently added layers of scrutiny. They must have precisely followed the newly established federal decrees along with the recently authored General Orders of the CPD, all while adhering to the Black Lives Matter demands.

When these stressful reviews are completed, the watchdog groups, including the local newspapers and television stations take over and deconstruct every piece of evidence, video, audio, and witness statements. They try and find the ‘Holy Grail’ of journalism: The smoking gun that discredits the officer’s action.

After the lights are turned off and the last of the investigations are completed, the federal civil suits are filed and more than likely paid immediately by Chicago’s city council. They have never seen a settlement that they didn’t like. And, before the dust settles. Punishment in the form of disciplinary action will cripple whatever spirit is lingering in the officer’s brain. Disciplinary actions simply because the needed actions looked bad.

Oh, remember, the city of Chicago and Cook County is at the forefront of social justice and restorative justice, so even if and when the shooter is caught, he will probably be given a recognizant bond or be required to wear an ankle bracelet. We don’t want to keep him in Cook County Jail awaiting trial just because he can’t afford a cash bond.

Who cares, you ask? Even after all this crap, the Chicago street cop is who “f***ing cares!”

NOTE: View Larry Casey’s website at www.StoriesofaChicagoPoliceOfficer.com/ and review his book by the same name.