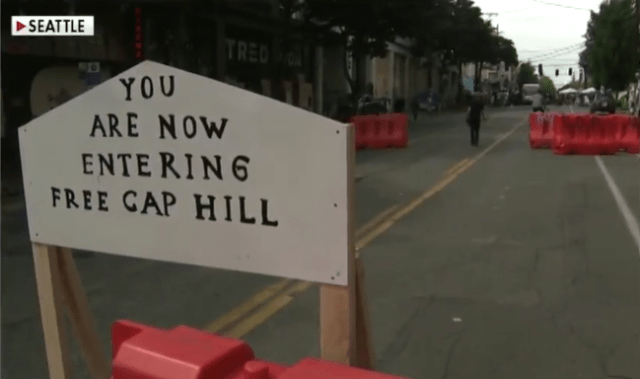 Seattle police broke up what participants are calling an “antifa soccer” game and arrested seven people Sunday in Cal Anderson Park, where the city recently cleared a homeless encampment.

According to the Seattle Times, the park, on Seattle’s Capitol Hill, has been the site of a homeless encampment and a hub for protest activity since the former Capitol Hill Organized Protest zone that demonstrators formed following the police killing of George Floyd in Minneapolis this spring.

SEATTLE POLITICIAN WHO CUT POLICE FUNDING, CALL THE POLICE TO PROTECT HER

Video of the encounter shows several officers walking toward the soccer game, and the dispute, which occurred at about 4:30 p.m. “You all do realize the double standard here, right?” a participant tells police who arrived to remove the black-clad group.

And just like that the new Seattle Autonomous Zone is swept. The protesters who talked a big game, and built barricades etc., folded and ran as usual as soon as police entered Cal Anderson part. ? #seattleprotests https://t.co/89bhH3EPR3

After one wannabe Pelé spit on a responding officer, six others that identified as Antifa, attempted to unarrest the budding soccer player. According to witnesses on the scene, a large group surrounded the officers when additional police were called to the scene.

CHAZ/CHOP autonomous zone has been reestablished in Seattle

Same beautiful architecture and decorations as the first zone

Will this be a “winter of love?”
pic.twitter.com/FhpyhS1t17

Sunday’s incident was preceded by the clearing of the park by law enforcement on Friday when 24 people were arrested.

Share and speak up for justice, law & order...
Tags: antifablackblocNewsseattlesummer of love