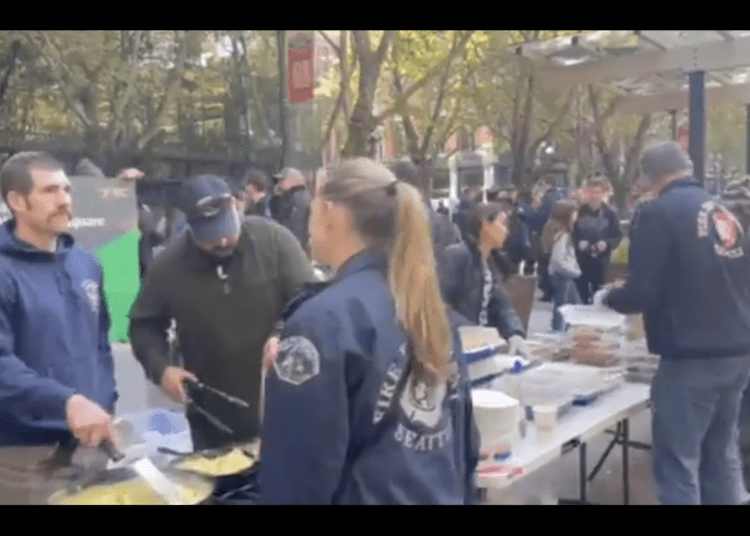 Seattle first responders feed the homeless after being fired for refusing the COVID shot. (Twitter)

SEATTLE — Seattle police and firefighters who suddenly found themselves unemployed since they refused to get the COVID shot — a Washington state mandate — were seen feeding the homeless on Tuesday.

“Seattle firefighters and Seattle police officers that were fired for not complying with the vaccine mandate are out feeding the homeless,” the Post Millennial tweeted Tuesday, accompanied by video footage of the noble gesture.

Seattle firefighters and Seattle police officers that were fired for not complying with the vaccine mandate are out feeding the homeless.

Democratic Gov. Jay Inslee’s vaccine mandate for most state workers took effect Monday at 11:59 p.m. Consequently, employees who did not show proof of receiving the shot were subsequently out of work, Fox News reported.

“At 12:01, if they’re not vaccinated, it depends on whether there’s an exemption process or whether they just haven’t filed their paperwork,” Democratic Seattle Mayor Jenny Durkan said Monday at a press conference. “Everyone has to be vaccinated, but we will try to provide a last chance for every city employee who has not complied with this. Our goal here is not to lose employees. Our goal is to get everybody vaccinated.”

Sad video footage also shows dozens of first responders walking up the steps of Seattle’s City Hall to return their boots after being terminated in what has been described as a political purge.

Seattle PD and Seattle Fire walking up the stairs of Seattle City Hall to turn in their boots. These a excellent officers and firefighters with years of service that truly can’t be replaced. pic.twitter.com/OmfrMhCNpc

The fire department has 93% of its employees vaccinated as of Monday morning and 6% had filed for exemptions, Fox reported.

The purge crosses over to all state public employment as the highest paid state employee also got the axe, NBC News reported.

Washington State University’s head football coach, Nick Rolovich, whose salary of $3.1 million made him the highest-paid public employee in Washington, was fired due to non-compliance with the demand for a COVID shot.

“This is a disheartening day for our football program,” the university’s director of athletics, Pat Chun, said in a statement. “Our priority has been and will continue to be the health and well-being of the young men on our team.”

Four assistant coaches were also terminated for noncompliance with the mandate, the school said in a statement.