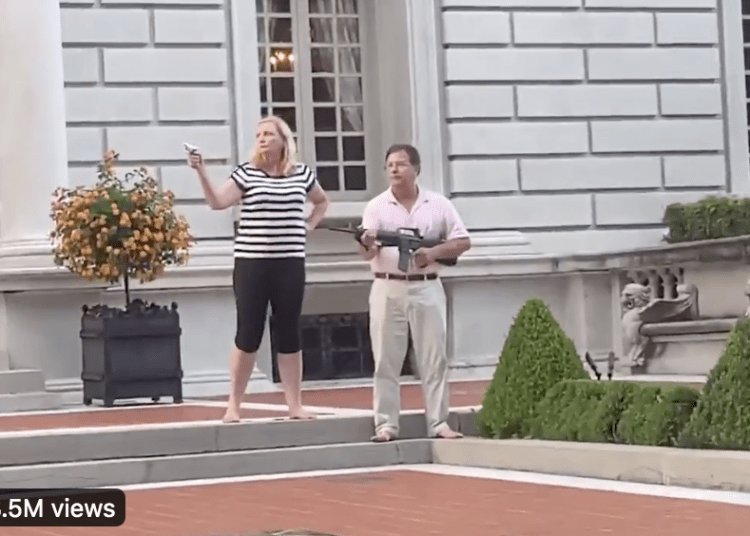 ST. LOUIS — St. Louis police officers executed a search warrant Friday evening at the home of Mark and Patricia McCloskey, the Central West end couple who confronted an unruly mob of protesters with weapons in June.

Police seized one of the weapons, the rifle, from the couple and they told police their attorney has the pistol seen in photos, KSDK reported.

The news agency is not aware of any charges against the McCloskeys at this time, and the warrant served Friday evening was just for the firearms.

BREAKING: Warrant reportedly served on St. Louis couple who stood outside their home with weapons as protesters approached. We're told weapon(s) seized. We've got the warrant and pictures for you at 11p – PLUS, Missouri @AGEricSchmitt joins us LIVE @FoxNews @FoxNewsNight

The McCloskeys attorney Joel Schwartz confirmed a search warrant was issued at 8 p.m. Friday night, but would not say what was taken from the home. Schwartz also said he does not know where the handgun is.

This was the scene on the day of occurrence in late June:

A couple has come out of their house and is pointing guns at protesters in their neighborhood #StLouis #lydakrewson pic.twitter.com/ZJ8a553PAU

Protesters have stopped at the Mayor’s house #StLouis #LydaKrewson pic.twitter.com/0jRYzzr8cI

The protest is on the move, marching down Kingshighway. pic.twitter.com/Z1ZUgFa9Ae