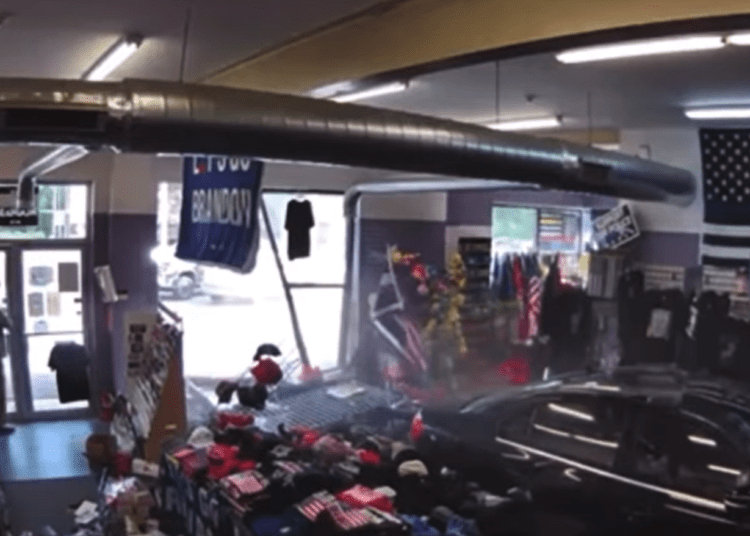 EASTON, Mass. – A driver has been charged after intentionally crashing his vehicle into a pro-Trump merchandise store. An employee said the man was “hearing voices” in his head that were reportedly telling him to commit the crime.

The Easton Police Department said Thursday the operator of a 2015 Volkswagen Jetta drove into the New England for Trump store on Washington Street, Fox New reported.

A surveillance camera inside the store captured the stunning moment the vehicle came crashing into the business at about 5:10 p.m.

An employee standing near the front door is just a short distance away from the area of impact as the Jetta smashes through the front wall, video of the crash appears to show. The vehicle came to a rest about 20 feet inside the store.

Karla Kelley is an employee at the store. He said they sell sell merchandise supporting the 45th president.

During an interview with Fox Business, Kelley said there was no altercation or provocation that happened to make the man drive “off of the street and into the building” in his car.

According to Kelley, “the voices in his head told him to do it,” based upon the man’s ramblings afterward. He also noted there was an “anti-Trump sticker on his car.”

Kelley hopes charges are pursued against the driver and that “there’s a chance” the store could be targeted again “but there’s a chance of lot of things happening.”

Law enforcement authorities identified the driver and said he’s been charged with a criminal act.

“At this time Flaherty has been charged with reckless operation of a motor vehicle and malicious destruction of property,” he added. “Additional charges may follow.”

Police said Kelley was the sole employee inside the store at the time of the vehicular assault and was was not injured, Fox reported.

The Easton Police Department requested the Registry of Motor Vehicles revoke Flaherty’s license amid their investigation, they said.

The store made quick repairs and was re-opened on Friday. .