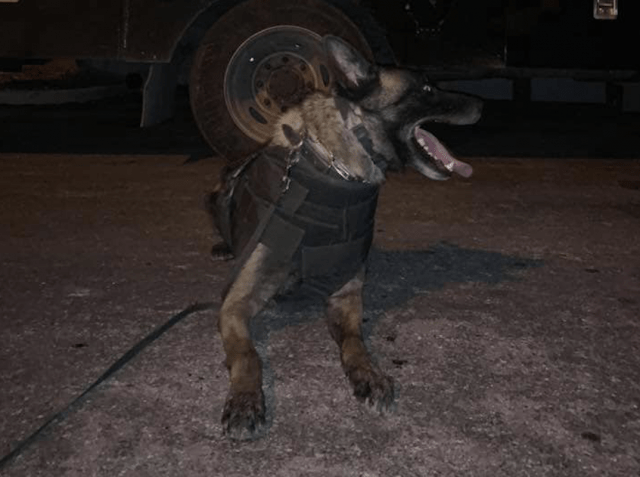 TUCSON, Ariz. — Tucson police arrested a bank robbery suspect who reportedly stabbed a police service dog while officers were attempting to arrest him.

Authorities say Garcia stabbed the K9 Blitz, twice with a “homemade knife,” according to the Tucson Police Department.

Garcia, who was wanted for robbing a US Bank earlier this month, was taken into custody. Police say Blitz was bleeding heavily from his neck and taken to an animal hospital.

Fortunately, he is expected to make a full recovery.

Early this morning K9 Blitz was called in to assist the SWAT team as they attempted to arrest a suspect wanted in connection with a bank robbery. With the assistance of Robbery Detectives, Ops East CRT, and Pima County Air Support the suspect was located near Grant and Swan. When confronted by SWAT the suspect ran away. K9 Blitz chased the suspect nearly a block before apprehending him. During the apprehension the suspect stabbed K9 Blitz in the neck multiple times. Despite being wounded Blitz refused to give up and held onto the suspect until SWAT Officers could catch up and detain the suspect.

K9 Blitz was rushed to VCA Valley Animal Hospital And Emergency Center where he received emergency care. Fortunately K9 Blitz’s injuries were not life threatening and he’s expected to make a full recovery.

We’d like to thank the professionals at Valley Animal Hospital for the excellent care they provided Blitz. We’d also like to thank our Robbery Unit for relentlessly working this case and charging the suspect with assaulting Blitz.

This incident is a reminder of how dangerous this job can be for our Officers and K9’s. Please join our unit in giving K9 Blitz a “Good Boy”. After all… that’s all he ever asks for.

“Good boy,” Blitz. Everyone at Law Officer wishes you a speedy recovery!