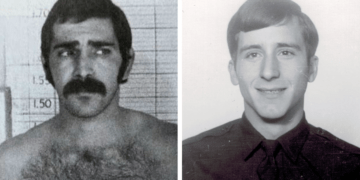 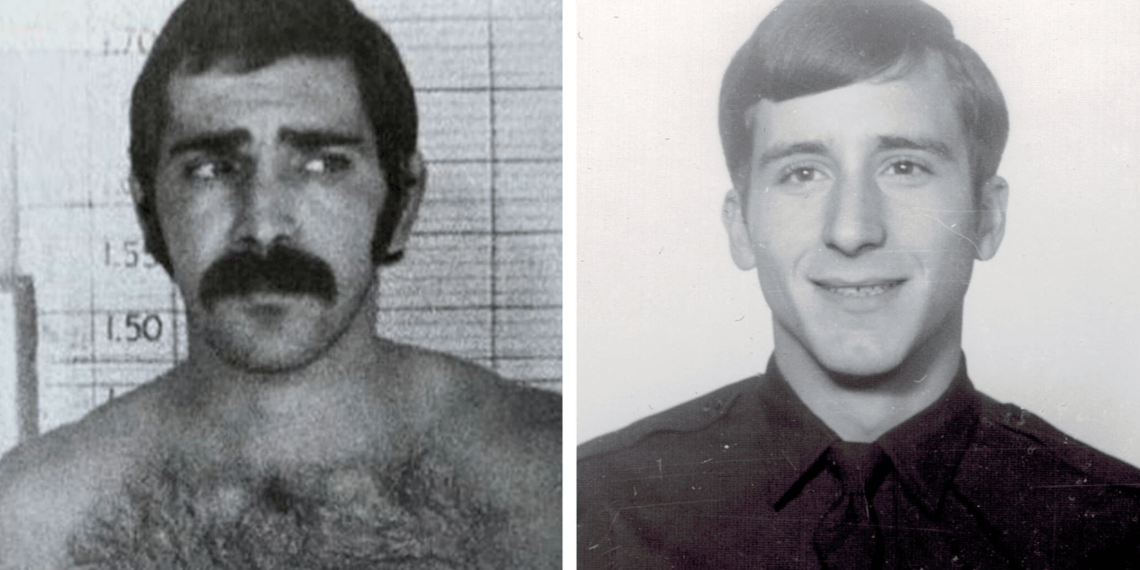 In 1971, Luis Archuleta, left, shot Daril Cinquanta, who was then a rookie police officer in Denver. (Daril Cinquanta via New York Times)

Retired Denver police officer Daril Cinquanta never forgot the man who shot him while he was on duty in 1971. So when the man, Luis Archuleta, escaped from prison in 1974, the officer kept his assailant on his mind. Now, fast forward several decades. As a retiree, Cinquanta made it his mission to track down Archuleta; and he did.

Cinquanta spent years reaching out to contacts hoping to develop leads on Archuleta’s whereabouts. In the 1980s, information led him to believe that Archuleta was in San Jose, Calif., but it was a dead end.

Moreover, Archuleta’s escape was even highlighted on the television show “America’s Most Wanted.”

Yet, Cinquanta’s persistence paid off after nearly 50 years when he got an anonymous call on June 24 suggesting that he look up a name: Ramon Montoya.

The caller believed that the fugitive who shot Cinquanta was going by that name, and provided an address in Española, N.M., about 25 miles north of Santa Fe, reported the New York Times.

Some investigative footwork discovered that Montoya had been charged in 2011 with DUI. When Cinquanta searched the arrest, the person in the booking photo looking back at him was a considerably older version of Archuleta.

Acting on information Cinquanta shared with the Española Police Department and the F.B.I., the authorities on Aug. 5 arrested Archuleta, 77, who also used the alias, Larry Pusateri, according to the Times report.

Archuleta had been living under the identity of Ramon Montoya for almost 40 years, the F.B.I. said. He lived in a modest Española home that he shared with a woman, the authorities said.

The Santa Fe New Mexican reported that many of the people in Archuleta’s neighborhood knew little about a Ramon Montoya.

“I told people it was like a hobby,” Cinquanta, 72, said of his efforts to find his assailant. “I mean it kind of was. He shot me, he was dangerous and he was out there.”

According to the New York Times, Cinquanta and Archuleta’s paths first crossed on Oct. 2, 1971, when rookie Officer Cinquanta spotted Archuleta in a car with two women.

To him, Archuleta looked “like a bad guy,” he recalled.

Indeed, five months earlier, Archuleta had been serving a sentence for burglary and drug possession convictions. However, he escaped from a California prison “after putting dummies in the form of blankets and pillows in his bed,” according to an F.B.I. affidavit.

Cinquanta initiated contact with Archuleta, requested his identification and asked him to get out of the vehicle.

The two walked to the rear of Archuleta’s car, where he pulled a gun from his waistband. Cinquanta tried to reach for the firearm as the two men struggled for control. In the process, Archuleta shot Cinquanta in the stomach and fled.

“Back in those days, we didn’t have bulletproof vests, nor did we have radios that came out of the car,” Cinquanta said. “So I had to crawl to the car to call for help.”

An F.B.I. affidavit tells a sweeping story of Archuleta’s return to Colorado, and later, his second escape from confinement, according to the Times.

Investigators tracked down Archuleta months later, after he was arrested in Mexico on drug-trafficking charges. As he was being booked, officials learned of his warrants in the United States. In 1973, he was convicted of assault with a deadly weapon of a police officer and sentenced to up to 14 years in prison.

However, his prison confinement ended nearly 17 months later when Archuleta escaped from a state hospital in Pueblo, Colo., with another inmate, Sidney Riley.

As the story goes, Archuleta and Riley, along with three other inmates, were transported to the hospital for medical appointments. Riley asked to go to the restroom multiple times when they arrived, the F.B.I. affidavit said.

Archuleta was given permission to go to the restroom but never returned. A correctional officer who went to check on him was met by Archuleta, who pointed a gun at the officer. Riley threatened another officer with a gun, and the two inmates fled in a brown sedan.

“This escape was like something out of a Hollywood movie,” Cinquanta said.

The retired Denver cop said local and state authorities exhausted their resources in searching for Archuleta and eventually sought federal help. (Riley was apprehended four days after the escape.)

After Cinquanta’s tip in June, F.B.I. agents interviewed a woman, who identified herself as Archuleta’s ex-wife, as well as Archuleta’s son. Both knew Archuleta as Ramon Montoya, according to the F.B.I. affidavit.

Federal investigators showed them a picture of Archuleta on an F.B.I. wanted poster from 1978, and the two confirmed it was the man they knew as Ramon Montoya.

His son, Mario Montoya, said his father told him that he was wanted and that his real last name was Pusateri, the affidavit said.

Now that Archuleta is back in custody, he appeared in federal court, and arrangements were being made for him to be returned to Colorado.

Cinquanta was a well-known Denver officer who chronicled his police-life in a book, “The Blue Chameleon: The Life Story of a Supercop.” Nevertheless, his career wasn’t without controversy.

In 1989, Cinquanta and another officer were placed on unpaid leave after being charged with 17 counts for “allegedly setting up crimes to entrap suspects,” The Denver Post reported.

Cinquanta, who pleaded guilty to two counts of first-degree misconduct, said the charges were “garbage,” and called the accusations untrue.

“Those felonies never stuck,” he said on Sunday. “It was ridiculous. It really was.”

However, a short time later, Cinquanta retired and started his own private investigation firm, while also spending years hoping he’d catch the man who shot him.

“It was like unfinished business,” he said. “Cops and robbers. I felt it was worthy to try to get him, and I did.”