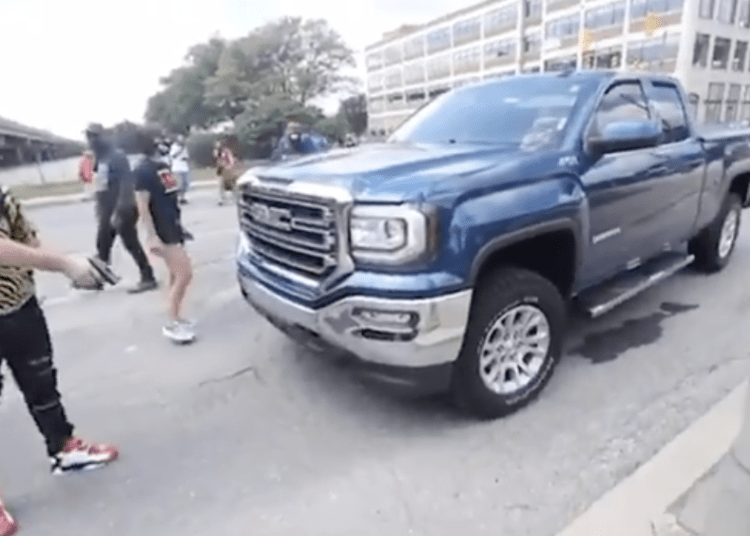 INDIANAPOLIS — A Black Lives Matter protester is seen on video pulling a gun on a truck in Indianapolis late last week as the truck tried to use the roadway that was occupied by a mob.

According to local media, the incident appears to have happened last Thursday, Daily Wire reported.

The video showed a person draw a handgun as the vehicle tried to get around the protesters. The truck then tried to drive around to the far side of the road in an apparent attempt to get passage by them.

However, the same mob of protesters who initially confronted the driver ran to the other side of the road and prevented the driver from moving forward. The driver eventually had to reverse and turn around to leave the area.

“Come’on buddy, don’t be stupid,” someone shouts at the driver as someone else throws a water bottle at the truck.

The Indianapolis Recorder documented the incident and its description of the vehicle matched the vehicle in the video.

“Underneath the I-65 bridge, tension mounted between several members of the protest and a driver,” the newspaper wrote. “While members of the group tried to redirect traffic, a driver in a blue truck revved the engine, sending protesters scrambling to the sidewalk. One protester, who only identified himself as ‘Icon,’ pulled a gun on the driver.”

The video does not appear to capture the truck revving its engine at protesters, only trying to get around them.

Gun-toting terrorists created by the Democrats unlawfully restrain unarmed citizens. #VoteRed like your life depends on it. pic.twitter.com/0gBMyBQOFC

“I was scared he was going to kill me,” the person who admitted pulling the firearm told the news organization. “I stepped in front of a little girl when he revved his engine, but, yes, I absolutely drew a gun to defend myself.”

UPDATE: Law Officer received the following details from a reader:

“The Indy blm protestor who brandish a weapon at a makeshift checkpoint is a local named Jonathan Levi Howe. Also the owner of local recording studio named city dump records and goes by the name Icon.”