The Recommendation Comes From The Racine Police Reform Report 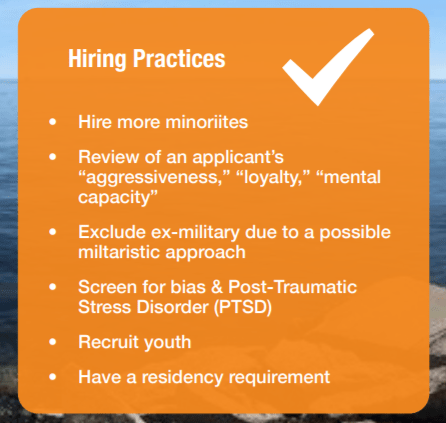 The City of Racine, Wisconsin released a “Police Reform” report last month that touted recommendations such as “mandatory” de-escalation, giving warnings prior to using deadly force, and banning anyone with military experience from joining the Racine Police Department “due to a possible militaristic approach.”

When we heard about some of the highlights of what can only be described as lunacy, we didn’t believe it. But you can read the report yourself.

To be clear, this is a well organized report and someone, somewhere, is awful proud of it.

But they shouldn’t be.

It’s a mixture of ridiculous and dangerous promises mixed with outright lies without any explanation or scientific backing whatsoever.

Mayor Cory Mason wrote a lengthy introduction and it was clear that the death of George Floyd was why this report and it’s recommendations have occurred:

“The first answer is that we must restore people’s trust and confidence in local policing. If that wanes, it could
erode decades of community oriented policing work. After George Floyd’s murder, I heard the cries of anguish from so many residents who do not and have not had positive or trust-enhancing experiences with RPD.”

We are going to say this one more time for people that don’t have eyes to watch the Floyd Body Camera Footage or can read a coroner’s report.

George Floyd took a lethal dose of Fentanyl. The autopsy showed no trauma on his body and no asphyxiation. There is much more we could discuss here and we have, but how does the death of George Floyd 350 miles away have anything to do with anything Mayor Mason said?

We get it. Mason is a classic politician and he’s doing what politicians do….which is agree to anything and everything and never respond with facts.

After all, we are here today because Minneapolis Mayor Jacob Floyd knew a whole lot that he refused to tell the public.

And it is obvious in this report that there is a perception that blacks are targeted by the Racine Police Department along with “systemic racism and white supremacy” being listed as the top two themes within the response from the public.

This is a huge problem for the city and the police department and here is the troubling thing.

There is an absolute explanation why African Americans are shot either armed or unarmed. First, out of those seven items listed, how does “attacking cops” not find it’s way on the list?

Seriously, it’s not like this information is not widely available and how do these FACTS not make it in the report. If we are going to recommend crazy ideas, some of which will risk the safety of officers, can we at least get some evidence or science behind it. After all, we are thinking that Mayor Mason “listens to the science.”

First, to the unarmed question. As we have pointed out numerous times, the vast majority of “unarmed” suspects are violent and dangerous. There is no debate there. You can read about each incident with a simple internet search but how about this…..More whites are shot “unarmed” than blacks. Not just in numbers, (because there are more whites) but by percentage.

That is not some made up number. Everyone reading this can swing over to the Washington Post Police Shooting Database and read this for yourself. All of this could have been in this report. It could have helped ease tensions that the community no doubt has because they watch the national news and simply believe what they are being told.

It is disturbing that this report, the mayor or the chief, absolutely refused to tell the public any other alternatives as to why African American Males may be shot at a higher rate.

First, the report doesn’t even list what the rates are in Racine and if it did, it’s pretty easy to see whether “systemic racism” or “white supremacy” is involved.

All you have to do is look at the crime rates.

Is there disparity in African Americans committing crime, in particular violent crime?

Compare that number to the number that force was used on.  If it’s not close in percentages, maybe you have a problem but you really have to ask yourself why this wasn’t included in the report?

And just to clarify, the reason you have to compare those numbers, is this is who cops shoot. Shocker isn’t it? Law enforcement tends to have to shoot violent criminals so with that said, why in the hell would we ever compare overall police data to census data? Just like anywhere else, police data should be compared to the data that applies to them and that is CRIME.

THE LIES OF SYSTEMIC RACISM

Could it be that by including that important data, we couldn’t call the Racine Police Department a bunch of white supremacists and racists?

Could it be that it would cause those reading it to see that there is also disparity in who is committing violent crime?

Could it be that all of these silly recommendations including to not hire anyone with a military background, some of the finest men and women our country has to offer, could not be implemented if the public knew the truth?

Honestly, we have no idea because the report lacked all of this information.

Whoever is behind this should be ashamed of themselves. The public and especially the minority community deserves to hear the truth….whatever that truth is.

And identifying the death of a guy hundreds of miles away that took enough fentanyl to kill a horse and placing that on the shoulders of the Racine Police Department is absolutely disgusting.

Imagine if we treated any other profession like this. Imagine if every school teacher got called a rapist because one teacher in another state committed that horrible act?

You can’t imagine that because that is the stupidest philosophy you have ever heard of and so is this.

If our politicians and police chiefs don’t start telling the truth, they won’t have a city or a police department to blame anymore…..and we would not blame them one bit.