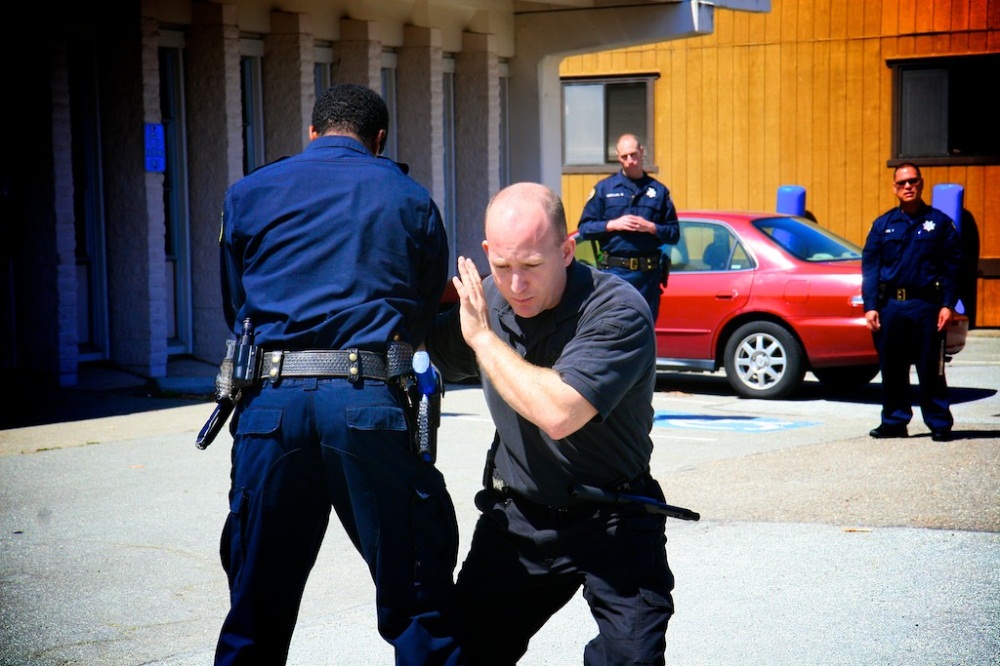 Attempting to arrest the subject for domestic violence, the patrol officer located and stopped him in a parking lot in the area after he fled the house where he lived with his girlfriend. But the officer’s orders of, “Turn around and put your hands behind your back,” were not met with compliance. The suspect, a professional boxer and violent criminal, turned and hit the officer in the face with multiple punches, knocking him to his knees. The officer felt the darkness of unconsciousness closing in and, still being pummeled, feared that his life was in danger. He wasn’t able to complete his draw before he lost consciousness and the suspect made his escape. Responding officers found the officer in the parking lot with cuts to his head. The suspect had drawn a blade from a utility knife hidden in his pants pocket and slashed the officer on the top of the head. *As a side-note, when the suspect was arrested later that night—though handcuffed behind his back, he head-butted another officer in the face, breaking his nose.

The officer involved in the above incident is a longtime friend and coworker since 1982. In addition to the lacerations to his scalp and injuries to his face from the punches, he sustained a concussion. He is a tough cop and veteran street officer. But he was dealing with and attempting to arrest a violent felon and skilled fighter who attacked when he saw an opening. His attack was deadly. Even before he drew his concealed blade and slashed the officer’s head, the repeated violent punches to the officer’s head to the point of unconsciousness were a deadly threat to the officer and he could have lawfully shot the suspect. Many officers, supervisors, administrators and certainly politicians and the public don’t understand that a suspect, by virtue of a violent unarmed attack, can present a deadly threat to an officer or others. An officer is not required to submit to such a violent attack and can respond with deadly force if they believe that their life, or the life of another, has been threatened with death or serious bodily injury.

But under what type of circumstances can officers use deadly force against an unarmed suspect?

“Lethal force or deadly force, (the terms are interchangeable) is that degree of force which a reasonable and prudent person would consider capable of causing death or great bodily harm,” “grave bodily harm,” “serious bodily harm,” etc.; the easiest way to remember it in layman’s terms is “crippling injury.”The set of circumstances that justifies the use of deadly force is a situation of immediate danger of death or great bodily harm to oneself or other innocent persons.” —Massad Ayoob, Deadly Force: Understanding Your Right to Self Defense

A police officer can use deadly force when it is objectively reasonable for him to do so. A reasonable amount of force may be used based on reasonable perceptions and the totality of the circumstances. Being shot at, having a suspect point a weapon at you, facing an armed man with gun in hand, dealing with a suspect who attempts to draw or grab a firearm, a violent person within a reasonable distance armed with a knife or bludgeon all allow the use of deadly force based on the totality of the circumstances and the officer’s reasonable perception that their life, or the life of another, is being threatened with deadly or serious bodily harm. Certainly officers want to make every effort to avoid “blue-on-blue” shooting incidents or fratricide where they shoot off-duty officers who have interceded in violent encounters or, for that matter, private law abiding citizens who are attempting to stop a violent attack against themselves or someone else.

It is vital that good tactics are employed to protect you, other officers and the citizenry. If time and the circumstances permit, keep your distance and seek cover prior to engaging potentially armed suspects.

But there are other circumstances with unarmed subjects which are deadly force encounters.

Two professional wrestlers went to a local fast-food restaurant after a match. The restaurant had just closed and refused the men entrance. One of the two picked up a 30-pound landscaping stone and threw it through the window of the restaurant. Two officers, one male, one female were dispatched to the call and confronted the wrestlers later at their hotel. They were immediately attacked. The male officer was attacked by one wrestler, suffered serious leg injuries and was then pummeled by the other suspect. As he was lying on the floor his female partner was repeatedly slammed against the wall. She sustained career-ending injuries to her head and face.

Neither officer fired a shot. Clearly this was a deadly force situation (one of the two suspects was a former Olympic weight lifter and steroid abuser, who was the first American to lift 500 lbs. above his head). This is not to second guess the responding officers who were seriously injured in the attack, but to attempt to learn from their experience.

Hyper-violent suspects who are deranged, very large, under the influence of drugs, exceedingly strong, well-skilled or trained and who are actively and violently attacking an officer may present a deadly threat if the officer reasonably believes his life is in danger or the suspect may inflict serious physical harm.

You only have to go to YouTube or check out officer safety training videos to see graphic examples of officers being beaten unconscious: the female officer punched in the face and knocked out, then mounted by the much larger male suspect who repeatedly punches her in the head; the male officer knocked out by the male D.U.I. suspect; the video of the officer being beaten by a suspect on the hood of his patrol car—I could go on and on. How about those officers bitten by hyper-violent suspects? There are officers who have had their cheeks, necks, ears and even fingers bitten off by “unarmed men.” Certainly it is clear that when these attacks occur, they involve serious bodily injury or grave bodily harm and officers have no legal obligation to attempt lesser forms of control before shooting the suspect.

Multiple suspects are potentially another form of deadly threat. The mere notion that you can use some type of academy-taught, empty-hand control to stop multiple suspects who are threatening or actively assaulting you and present a serious threat of death or crippling injury is based more on some action movie or TV show than reality  Even Rorion Gracie from the famed Gracie Jiu-Jitsu clan has asked this question about multiple attackers: “Could you, beat two of you, on your best day?” Mr. Gracie has even commented on his ownership of a firearm for these types of situations: “Any reality-based and experienced suspect control instructor would know that empty hand control is not suitable in encounters where two or more suspects are actively trying to beat you to a pulp or, for that matter, seriously threatening to do so.”

In my police career I have lost track of the number of male and female officers who’ve been knocked down to the ground and stomped. The result has been teeth kicked out, bones broken, concussions and other serious brain trauma. Being a cop does not mean you have to submit to those types of attacks.

Constable Darrel Lunsford had purchased his dashboard mounted camcorder out of the money he seized conducting drug interdictions in Nacogdoches County, Texas. On Jan. 23, 1991, Lunsford conducted a traffic stop on a vehicle with three suspects inside. As he was inspecting the trunk with them and found the marijuana they were transporting inside, they attacked him. Tackling the much larger Lunsford, they took him to the ground, stabbed him, then disarmed and killed him with his own handgun. All three were subsequently captured and convicted.

Since that time, holsters have improved, as have tactics in doing interdiction stops, but still over the last 10 years, according to the F.B.I.’s LEOKA—Law Enforcement Officers Killed and Assaulted research—18 out of 511 officers killed, or 3.5%, were disarmed and killed with their own gun.

Certainly being violently punched in the head and face by a violent attacking suspect carries with it the risk of serious injury in and of itself. Once incapable of defending yourself, you lose the ability to maintain control of your handgun and this is usually how these disarms and murders take place: officer violently attacked, injured or knocked out, disarmed and killed. There can also be those suspects who attempt a disarm without otherwise attacking or who attack while attempting to pull the officer’s handgun free from the holster. From a determined hyper-violent, deranged or manic suspect, all of these scenarios are deadly and all can be stopped by deadly force, shooting or stabbing the suspect with a patrol knife—if that is physically possible. In other words, you have to maintain control of your handgun first and foremost, and then (if possible) shooting or stabbing a suspect is a reasonable action.

As per Graham v. Connor, an officer’s force does not have to be the least amount of force, it does not have to be reasonable and necessary, it only has to be objectively reasonable; at the moment force is used, based on the totality of the circumstances. And deadly circumstances are not restricted to armed men. Unarmed attacking or threatening men or women—based on size, strength, ferocity of attack, threat of serious bodily harm, attempted disarm and more—can present a deadly threat and can be shot in order to stop them.

You don’t have to be beaten to death or seriously injured, disarmed and killed with your own gun. The law supports your right to use deadly force when you reasonably believe, based on the totality of the circumstances, that your life is in danger or the suspect(s) presents a risk of serious bodily harm. Now, go train to stop those threats.

Kevin Davis
Kevin Davis is a full-time officer assigned to the training bureau where he specializes in use of force, firearms and tactical training. With over 23 years in law enforcement, his previous experience includes patrol, corrections, narcotics and he is a former team leader and lead instructor for his agency's SWAT team with over 500 call-outs in tactical operations.