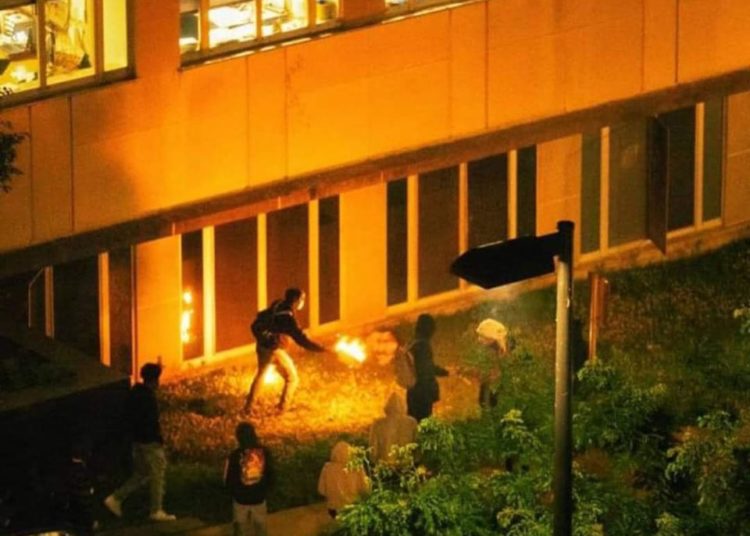 Black Lives Matters protesters and rioters tore down the capital’s iconic “Forward” statute along with the statute of a Union Civil War colonel last night but there appears to be much that the media is failing to report.

NBC 15 reports that Mayor Satya Rhodes-Conway sharply condemned the violence but called reports that the police were held back as a “false rumor.”

Calling the actions “far from peaceful and exceeding(ly) dangerous,” Rhodes-Conway said that someone tried throwing a Molotov cocktail through the broken glass of the City County Building.

Several Madison Police Officers have contradicted the media reports along with the Mayor’s statements and told us that additional police resources were sent home rather than staying on the job to face the violence.

When information was obtained detailing the firebombing of the county building, there was a decision to not take any action.

According to our sources, officers were advised to “stand down” and to avoid the area.

As the mob approached the building, officers requested to use gas on the crowd and the command post denied the request.

After a firebomb was thrown into the building, officers smelled smoke and reported it. Once again, they were told to stand down.

Dispatchers were evacuated from the building which resulted in a disruption of emergency services while several dispatchers and deputies responded to the area to put the fire out.

This action likely saved the lives of hundreds, including juveniles and inmates housed inside the building and jail.

In what has been described to us as “outrage” by law enforcement, officers believe that their lives were placed in peril with the leadership failing to permit them to take action.

An ensuing investigation has called the fact that lives were not lost in the fire as a “Grace of God” and the responding employees have been given the credit for ensuring a massive loss of lives did not occur.

There is currently a sentiment by law enforcement in the area to “walk off” the job, in light of the danger that the leadership in the area has promoted.

The media has been oddly silent about this event.

Please share and let the country know what is happening.