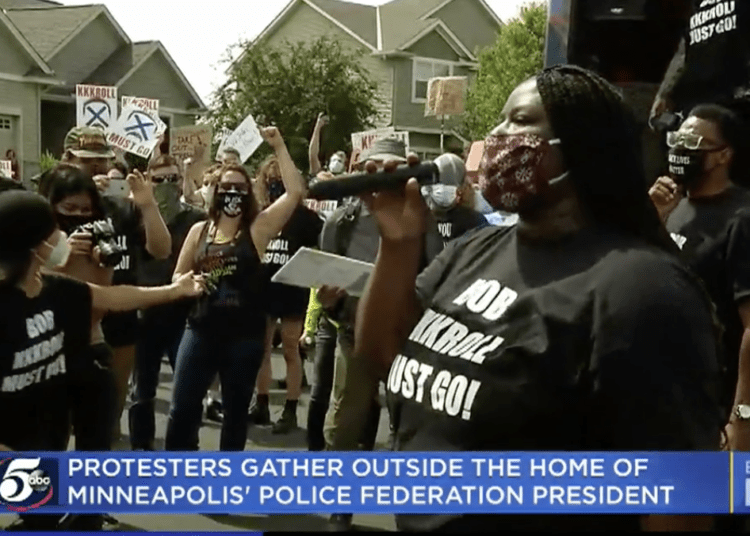 The goal of such a rally is to intimidate and antagonize. Although, more specifically, they also called for his resignation.

Video of the mob appeared to be along those lines as they chanted a chorus of, “Hey, hey, ho, ho, Bob Kroll has got to go.”

Kroll has consistently had a challenging job working as the president of MPF, with liberal governance that takes a hack at police officers whenever possible. Yet, very few people can begin to imagine the personal horrors he’s experienced as the union leader since the custodial death of George Floyd.

Nevertheless, antagonists continue to take swipes at him.

Local activist Tuscon Morrison spewed propaganda and rhetoric, which was reported by KSTP.

Regardless of Morrison’s comments, Kroll is a stand-up guy who unapologetically advocates for his cops. Sadly, he’s taken unwarranted criticism as a result.

Anti-police protesters are becoming more brazen as they’ve effectively bullied government leaders all over the country. Taking their bullhorns to the homes of police leaders isn’t new, but it’s unnerving; particularly when you know the circumstances can become combustible based upon anger and offensive tactics that mobs use.

Officer Joseph Mensah can testify to this fact.

Law Officer has chronicled the travails of Mensah — three justified OISs since 2015, now activists are aggressively coming after him.

Last Saturday, August 8, around 8 p.m., about 60 Black Lives Matter protesters attacked Mensah, who is black, at his girlfriend’s residence in Wauwatosa, Wisconsin just outside of Milwaukee.

Mensah and his girlfriend were attacked and assaulted by BLM protesters. Worse yet, one of the antagonists was armed with a shotgun and fired at them, Law Officer reported.

Mensah was interviewed by Brian Kilmeade on Fox & Friends a few days later. Kilmeade asked about the shooting as he wasn’t quite sure of the imminent danger to Mensah and his girlfriend when the weapon was fired.

“I 100 percent believe I was shot at,” Mensah said during the interview, which can be viewed here.

Meanwhile, everyone on staff at Law Officer wishes Bob Kroll the very best as he deals with the marauders gathering at his home.