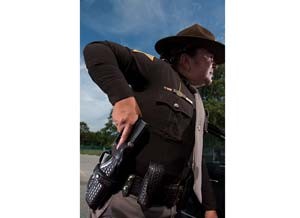 As a result of the Below100 initiative, law enforcement professionals are keenly aware of the tragic consequences in taking unnecessary risks—more officers and deputies are donning ballistic vests, wearing seatbelts and operating police vehicles with more caution. This effort has resulted in a significant reduction in non-violent line-of-duty deaths.

The success of Below100 shows us that it's time for a similar national effort toward reducing law enforcement homicides. Although the annual number of murders is much lower than it was four decades ago, there has been little reduction in this rate over the past 20 years. On average, at least one American officer or deputy is murdered each week, with countless more seriously wounded.

Law enforcement tactics and training have evolved over the years, often as a result of tragedy. The infamous Newhall Murders were the catalyst for improved standards on conducting high-risk traffic stops. Soon after the tragic events at Columbine High School, entire training curriculums were developed for stopping active shooters. And in the aftermath of the North Hollywood Shootout, more agencies implemented patrol rifle programs. These and other improvements have better prepared officers to handle deadly force incidents—but only those that can be anticipated.

However, most murdered officers continue to be killed in sudden armed assaults, ones that can't be anticipated, or where warning signs were missed. This is why we need a new evolution, one specifically focused on preparing law enforcement professionals for a sudden and unexpected fight for their life.

It's impossible to address every training issue or procedure in one article, so I'll focus on three that I believe require immediate attention.

Officers and deputies should first understand the sobering realities of fatal attacks. In many cases, the assailant is able to draw a concealed pistol and fire multiple hits before the officer can even complete their draw.

There is no more tragic example of this than the 2011 shooting of three South Dakota police officers. The officers had detained a subject for an infraction and were attempting to determine his real name. Without warning, the detainee quickly drew a revolver and shot all three officers, fatally wounding two and critically injuring the third. The first two officers who were shot were incapacitated before they could bring their pistols into the fight. Only the third officer had enough time to draw his pistol and fight back.

These officers were not complacent. Like so many other heroes whose names are now etched on granite memorials, they simply could not overcome the often-fatal reactionary gap that exists in most sudden attacks. In fact, of the almost 550 law enforcement officers murdered in the past decade:

• Nearly 70% died with their firearms still holstered; and

• Fewer than 25% had enough time to discharge even one round.

As more officers understand the dynamics of these assaults, it becomes clear why, as a profession, we must place much more importance on the specific tactics and training that can prevent, or at least slow, many of them. Two examples include seated detentions and foot pursuits.

Seated detentions—Although officers no longer approach vehicles containing persons they believe to be armed, most do not give a second thought to standing a few feet away from detainees who may have a concealed pistol. Considering tragedies like the shooting in South Dakota, we should finally move away from the common practice of standing face-to-face with detainees. Sit them down!

Anyone worth detaining should first be instructed to sit down. If a sidewalk, curb or chair isn't available, at least instruct them to assume a standing position with their arms and legs spread wide apart. These "positions of disadvantage," particularly seated positions, have been proven to discourage some attacks. At the very least, they help officers to quickly recognize the "furtive" movements of an assailant beginning their assault.

Foot pursuits—There's a growing appreciation for the significant dangers associated with foot pursuits. The risks of most chases usually outweigh the reward, as evidenced by the number of officers and deputy sheriffs shot and murdered while running after fleeing suspects. Agencies and trainers should research the latest studies and tactics regarding foot pursuits, and develop reasonable procedures on what circumstances merit engaging in one.

Preparation—Winning the Fight That Can't Be Prevented

When faced with an attack that couldn't have been prevented, officers usually have only one chance—and a few seconds—to win a sudden gunfight. Struggling with their holster, forgetting to move laterally or firing lightning-fast misses may prove fatal.

This has tremendous implications for law enforcement firearms training. As a profession we must stop wasting time on training that does not provide our personnel with the specific skills required for the most common and dangerous threats they may face. Law enforcement homicide rates show that generic qualifications and infrequent firearms training do nothing to prepare officers for the speed and violence of these attacks.

Every agency curriculum should include both regular live-fire and empty gun training. In every training session, students should drill on the specific skills and speed needed for an effective response.

With that said, law enforcement professionals must also embrace the concept that their firearms training can no longer end at their agency's range. Regardless of their enthusiasm about firearms training, officers and deputies have the ultimate responsibility for developing these life-saving skills. After all, it's the officer, and their loved ones, who have the most to lose if they cannot defeat their assailant.

Weekly training on a pistol draw with lateral movement, and monthly trips to a local range, can help to ensure that when faced with an assault, officers are not wasting precious moments standing still or frantically tugging on their holstered pistol.

Below100 training has helped bring about a cultural shift in our profession. Law enforcement officers have a greater understanding of the significant difference between inherent and unnecessary risks, and many are adjusting their behavior accordingly.

It's time to expand this risk management model toward preventing and defeating sudden armed attacks—and thereby reduce the number of officers who tragically fall victim to these assaults each year.