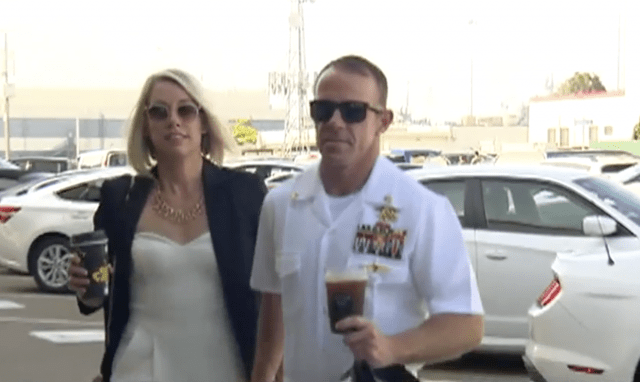 WASHINGTON – President Trump on Wednesday called on the Navy to rescind medals that had been awarded to the lawyers who prosecuted Edward “Eddie” Gallagher, just weeks after a jury in San Diego found the Navy SEAL not guilty on six of seven charges for his connection to the killing of a teenage Islamic State member in Iraq, Fox News reported.

“The Prosecutors who lost the case against SEAL Eddie Gallagher (who I released from solitary confinement so he could fight his case properly), were ridiculously given a Navy Achievement Medal,” Trump tweeted. “Not only did they lose the case, they had difficulty with respect to information that may have been obtained from opposing lawyers and for giving immunity in a totally incompetent fashion.”

The Prosecutors who lost the case against SEAL Eddie Gallagher (who I released from solitary confinement so he could fight his case properly), were ridiculously given a Navy Achievement Medal. Not only did they lose the case, they had difficulty with respect….

The president added: “I have directed the Secretary of the Navy Richard Spencer & Chief of Naval Operations John Richardson to immediately withdraw and rescind the awards.”

There were three Navy lieutenants—George O. Hageman, Brian P. John and Scott I. McDonald—and a female officer whose name and rank were redacted by USN, who received Navy Achievement Medals eight days after Gallagher was found not guilty on all but one relatively superfluous charge.

Gallagher faced seven criminal charges in all. Six of the most serious charges included premeditated murder, willfully discharging a firearm to endanger human life, retaliation against members of his platoon for reporting his alleged actions, obstruction of justice and the attempted murders of two noncombatants. On all of those charges, the jury in San Diego found him not guilty.

However, jurors found him guilty of the seventh charge, posing for a photo with a casualty, considered the least egregious of the crimes, which carries a maximum sentence of four months.

Gallagher served nine months in custody awaiting trial but was released ahead of trial proceedings at the end of May as the judge attempted to rectify alleged prosecutorial misconduct, which included the unauthorized tracking of the defense’s emails.

Perhaps the biggest bombshell in the case occurred on June 20 when Gallagher’s colleague, Special Operator 1st Class Corey Scott, admitted to asphyxiating the ISIS fighter back in 2017, contrary to the testimony of at least seven other SEALs who said Gallagher stabbed the ISIS fighter after medics administered treatment to him, ultimately resulting in the teenager’s death.