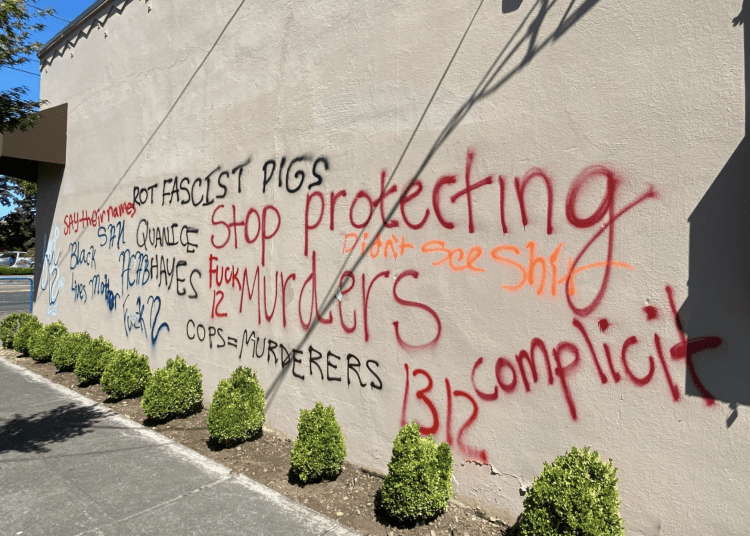 PORTLAND, Ore. —  The Portland Police Association vacated their headquarters after the building became an ongoing “target of vandalism and arson” over the past year, Executive Director Daryl Turner announced Tuesday.

The police union has called the office on North Lombard Street home for six years. Turner said residents in the area welcomed them and “were glad to have the police union and police cars there.” Yet tensions flared outside the PPA building multiple times in 2020, as anti-law enforcement sentiments led to continual protests and riots. As a result, the building was constantly subjected to graffiti, projectiles and fires, KPTV reported.

Last July, rioters broke into the Portland Police Association building and set it on fire with members inside, Law Officer reported. And again in August, rioters vandalized and broke into their headquarters, setting fires at the building and elsewhere nearby.

“As our building became the target of vandalism and arson last summer, there were several times that our neighbors helped paint over vile and vulgar graffiti scrawled across the outside walls and picked up trash and garbage,” Turner wrote on Facebook. “And as the rioting escalated at our location, we felt that the community was more and more at risk. At the most recent arson incident, a neighbor stood on the sidewalk with a water hose trying to put the fire out just before first responders arrived. It went too far and it was time to find another location. We have since moved out and relocated. The Lombard building will be repaired and, at a later date, put on the market to sell.”

So as the dangers mount for good citizens nearby, Turner thanked them for their support as the police association decided to move.

“We want to take this opportunity to thank the North Portland and Kenton community and particularly the business owners located adjacent to the building. We appreciate their support and patience over the last year. We thank them for their tolerance. And we hope that with our relocation, they can have some peace,” Turner concluded.