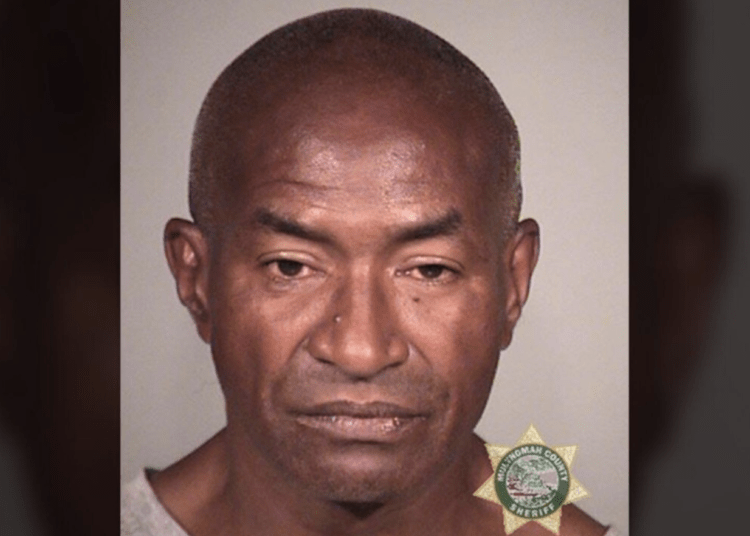 Police got 911 calls that Shane Vordelmicha Green had assaulted people with the handsaw and a belt, broken car windshields and threatened people. (Portland Police)

PORTLAND, Ore. — A 58-year-old man in Portland was seen on video wildly swinging a handsaw at people inside a laundromat, among other locations, according to reports.

Police received 911 calls that a suspect, later identified as Shane Vordelmicha Green, had assaulted people with the handsaw and a belt, broken car windshields and threatened people, KATU reported.

Officers found the suspect near the 2100 block of Northeast Weidler Street.

According to Portland Police, officers ordered the suspect to stop and drop the handsaw.

The suspect refused to drop the handsaw, continued westbound on Northeast Weidler Street, and told officers he was going to make them shoot him, police said.

The suspect walked in to the middle of traffic and continued to ignore multiple commands given by officers to drop the saw, according to police.

Police said officers tried to get the suspect to calm down, but he continued to yell at them and said they were going to have to hurt him to get him to stop.

While the suspect yelled at officers, he advanced toward them with the handsaw, according to Portland Police. Officers gave several more verbal warnings to the suspect.

The suspect continued his erratic behavior and officers used a less lethal munition (unknown type) on the suspect, according to Portland Police.

The suspect threw the handsaw to the curb and officers once again began talking to him in an effort to deescalate the situation, police said.

As officers spoke with the suspect, several bystanders interrupted their conversation with him by screaming and taunting the officers, only increasing his level of agitation again.

Eventually, police said through calm conversation and active listening, officers were able to place the suspect in custody without harm.

The current status of victims is unknown.