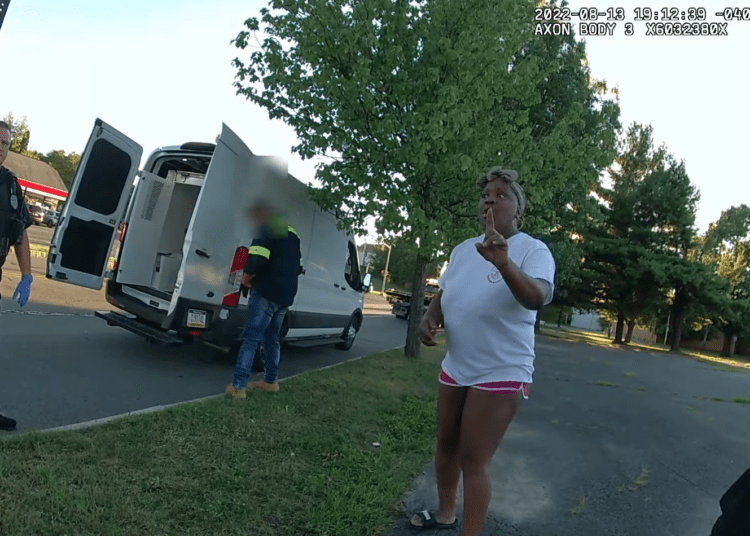 WILKES-BARRE, Pa. — A traffic stop involving the chairwoman of the city’s Police Advisory Committee turned into a profanity laced tirade when Darlene Duggins-Magdalinski protested the towing of her vehicle after she could not prove she had insurance. The driver of the vehicle was the woman’s daughter, who had a suspended license and a warrant for her arrest.

Wilkes-Barre Mayor George Brown released bodycam video of the Aug. 13 encounter to provide “full disclosure” after Duggins-Magdalinski accused Officer Dan Duffy of racial profiling and joined with the police union in calling for the footage to be made public, the Times Leader reported.

The driver of the Mercedes was Fa’tirah Duggins. She is the daughter of Duggins-Magdalinksi, and was operating the car on a suspended license. Moreover, she had an active warrant for her arrest and was subsequently taken into custody, despite her hysterical theatrics.

Duggins-Magdalinski filed a lengthy complaint. It can be viewed here.

“Darlene Duggins-Magdalinski, a Hanover Twp. resident, attempted to use her position on the PAC and supposed relationships with Mayor Brown, Chief Coffay, and other elected officials to change the disposition of the traffic stop, and when her attempts were unsuccessful, Duggins-Magdalinski resorted to profanity and threatening Officer Duffy’s professional credibility and career. This is the exact conduct the PAC is supposed to discourage and prevent.”

He added, “Lastly, ‘activist’ members of the PAC with hidden agendas degrades the integrity of the committee and tarnishes the transparency the PAC is attempting to promote.”

Without the participation of Duggins-Magdalinski, the committee will review the investigation underway by the police department regarding her complaint. The video from the cameras along with the completed report will be provided to the committee so it can make recommendations to Mayor Brown and Police Chief Joseph Coffay, according to the Times Leader.

Duffy cited Duggins-Magdalinski for multiple violations. She pleaded not guilty and has a summary trial before District Justice Rick Cronauer of Wilkes-Barre on Sept. 7.