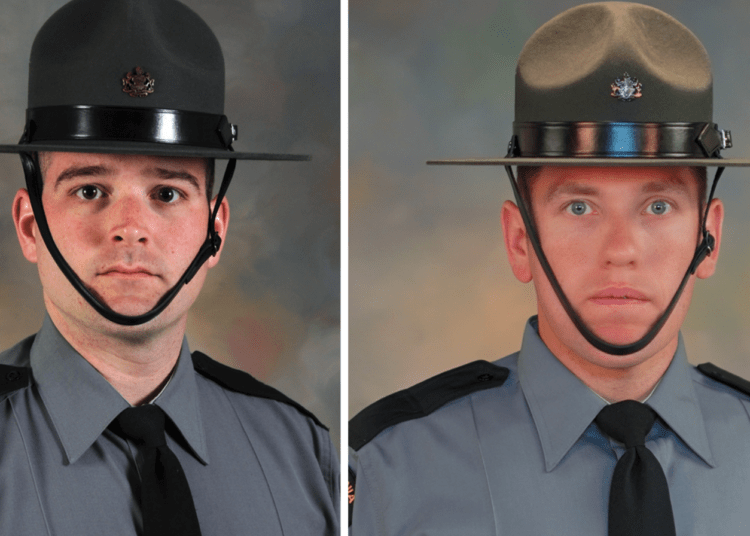 PHILADELPHIA – A triple traffic fatality occurred on an interstate in South Philadelphia early Monday morning, claiming the lives of two Pennsylvania state troopers as well as a civilian, according to authorities.

The crash occurred around 12:40 a.m. on I-95 southbound near the Stadium Complex, just north of Broad Street. All lanes were shut down for eight hours following the collision.

Pennsylvania State Police confirmed two troopers and a civilian died at the scene. The troopers have been identified as Branden T. Sisca, 29, and Martin F. Mack III, 33, WPVI-TV reported.

Two PA State troopers and a civilian were fatally struck on I-95 in South Philadelphia early this morning.
Damaged vehicles just were towed to Troop K. pic.twitter.com/0zn5nzXdzv

According to state police, the troopers were responding to reports of a man walking along I-95 south.

Authorities say as the troopers were helping the man into the back of their police car, a female motorist attempted to drive past the scene at a high rate of speed.

State police say she fatally struck the two troopers and the male pedestrian, as well as the cruiser, according WPVI-TV.

PHILADELPHIA COUNTY – The Pennsylvania State Police confirms two Troopers and a civilian were struck and killed on I-95 South in the area of milepost 18 in Philadelphia City at approx. 12:40 a.m. More information to follow.

Trooper Sisca had been with the agency since February 2021. Trooper Mack had been on the force since November 2014.

Just before 6 a.m., a police procession with at least 25 cruisers and motor units escorting the troopers’ bodies made its way from the crash scene to the medical examiner’s office, according to the news outlet.

Gov. Wolf issued the following statement in response to the deaths:

“Frances and I are deeply saddened by the tragic loss of these two state troopers and the individual they were assisting.

This tragedy is a reminder that our law enforcement officers put their lives on the line every day, and we Pennsylvanians are grateful for the men and women who protect us and our communities.

Frances and I are praying for the loved ones of these courageous troopers, the civilian they were assisting and for the Pennsylvania State Police.”