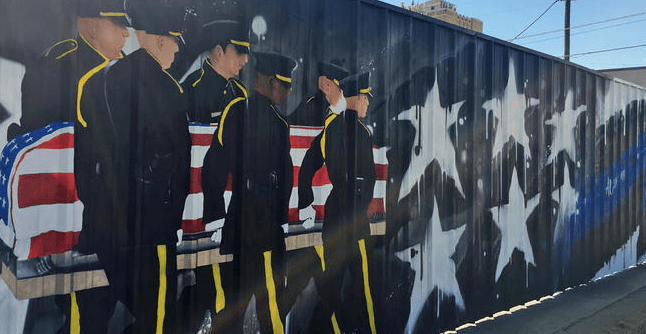 Dallas officials are asking that a mural honoring law enforcement officers who died in a sniper attack last year be taken down or altered because it violates city codes.

The owner of Last Call Lounge in downtown Dallas did not have a permit to use metal siding to construct the 8-foot fence on which the mural was painted, according to a violation notice issued May 25. Inspectors said the material blocks visibility at a nearby four-way stop.

After receiving the violation notice, he applied for a permit to build the fence and use the metal siding. He also hired workers to move the fence back three feet to increase visibility at the intersection.

NBC5 reports that the project cost about $15,000 and it will cost another $2100 to make the modifications requested by the city.

The painting pays tribute to the five officers killed during an attack on law enforcement at a Black Lives Matter rally in Dallas on July 7, 2016. Flowers, notes and other tokens have been left at the mural regularly since it was unveiled on Monday.