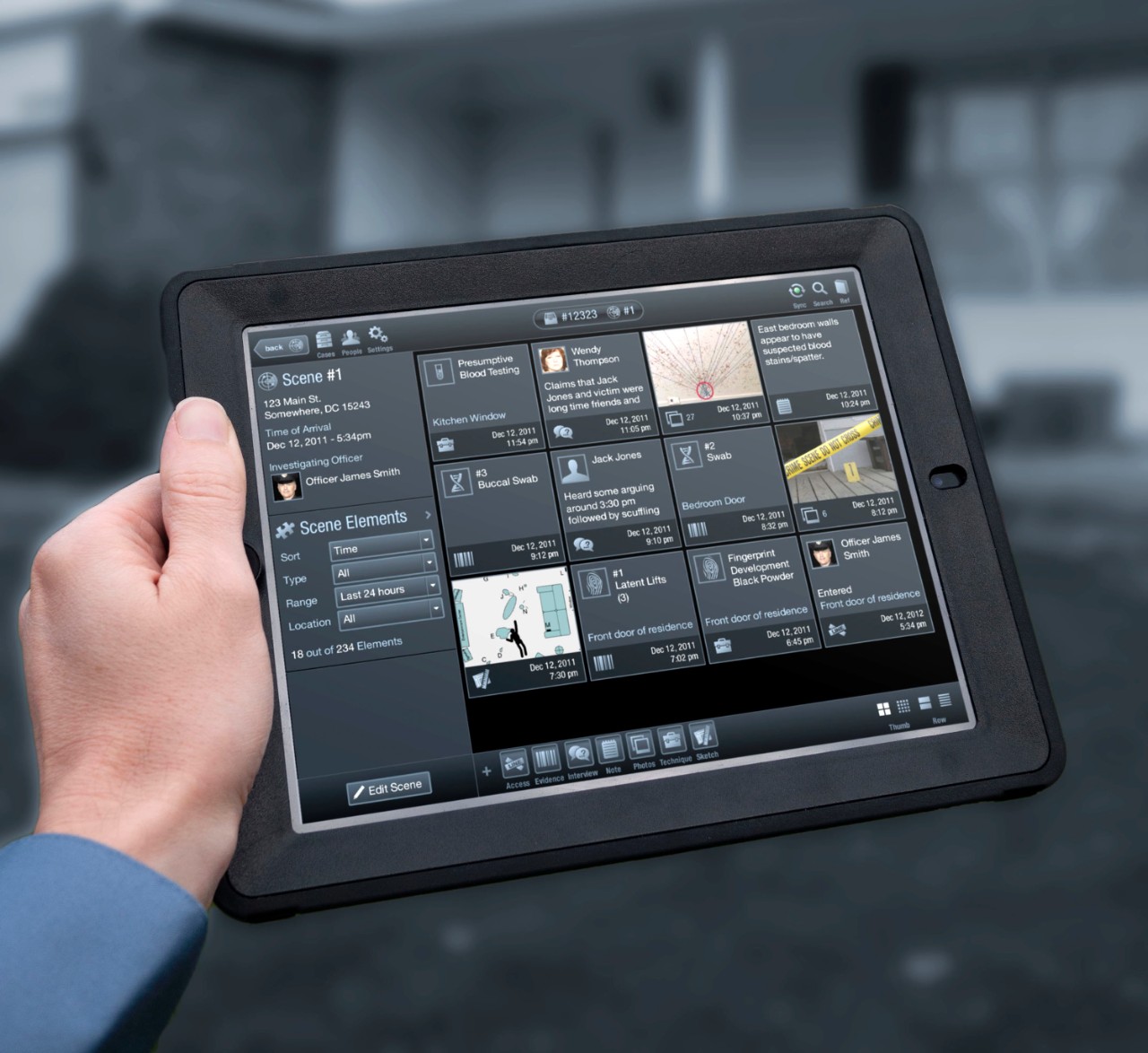 The criminal investigation process is disconnected: separate departments record separate notes to be managed in separate places. New devices such as body cameras, Rapid DNA and real-time identification amount to a flood of information that our paper worksheets can’t keep up with anymore. Before any law enforcement agency begins to add new technology and data devices, they need to think about where all that information is stored. They first need a connected system—a unified data platform to share all of the disparate information between systems and people. Mobile and cloud technology is being used to solve this problem.

Current State of Investigation Data
Data gathering is a very manual process: documenting scenes, collecting, packaging and labeling evidence, canvassing and interviewing, logging and writing reports, tracking down leads, etc. Data entry can happen hours or days after the first response, due to all the sorting, assembling, compiling and sifting that input requires. While systems such as RMS and LIMS manage and automate their own data, they aren’t easily available in the field where data collection actually occurs. Plus, it can be a hurdle to get them to “talk” to other systems. Exchanging data between people requires lengthy emails, phone conversations or in-person meetings, taking up time that could be spent on more involved casework. Context can also be lost: relevant information from different units or agencies may never get shared.

New Technologies & Adding More Data
Today’s technology may be moving faster than law enforcement can, but that doesn’t mean we shouldn’t try to catch up. Officers have been working to incorporate these technologies as quickly as possible and extend their usability to the criminal investigation. Body cameras are now capturing a wealth of valuable evidence. Smartphones and tablets are keeping officers connected. Crime scene technicians can review a scene after the fact with 3D laser capture and Rapid DNA processing could produce actionable analysis of crime scene evidence in less than 90 minutes.

While all of these new technologies can benefit the investigation, they can also carry with them unintended consequences that cause delays. Each requires new training, sometimes so specialized that only a handful of people are able to use it. In addition, there is a flood of information that law enforcement has classically been equipped to handle. Body cameras collect more video footage than anyone has time to review or process, especially in an active, fast-moving investigation. There is currently more data coming in than our processes are able to absorb.

Data Organization
Applying tomorrow’s technology to today’s law enforcement requires a platform that can manage and adapt to large amounts of data. It will also need to be available to and editable by multiple parties so that each group can determine a course of action. In order to efficiently collect, organize and distribute all of the information during an investigation, we need to adopt two emerging technologies: the first is a front-end interface to the data that every officer has available in the field and in the office; the second is secure data storage to log and store data and files in a way that mobile users can access.

The first challenge of having a front-end interface can be solved with today’s smartphones and tablets. Mobile devices have become the new computer, consolidating and replacing many of the functions we used to have on the laptop or desktop. In addition, apps increase the functionality of the already highly multifunctional smartphones and tablets along with growing network speed and connectivity. Wearables like Google Glass could provide a leg up for law enforcement, overlaying case details onto the scene or while canvassing. External devices like body cameras could also “talk” with smartphones to coordinate the storage and upload of that data.

On the back-end side, the cloud was built specifically to solve the types of data storage and connectivity that law enforcement needs. According to the 2013 IACP Cloud Computing Survey, more than half (54%) of member respondents said they were currently using or were considering using the cloud. Cloud technology is also extremely scalable and shareable: law enforcement can store large amounts of sensitive data in secure, CJIS-compliant servers. At the 2013 IACP conference, chiefs from large agencies including Cincinnati, Fort Worth and San Jose (Calif.) highlighted the benefits of a secure, CJIS-ready cloud: lower costs, faster deployment and secure environments. Data hosted in the cloud also allows law enforcement to access necessary data securely from remote locations.

How the Cloud Transforms Business Processes
By harnessing the power of cloud-based technology and automation, supervisors, investigators and CSIs will be able to share the data they collect in real-time with labs and police stations, providing a 360-degree view of the investigation. Law enforcement will be able to make quicker, more informed decisions, assigning leads and notifying labs of incoming evidence. Instead of storing information in different systems and spending time exchanging it, all data gathered at the crime scene could be uploaded to the cloud for ease of access. This real-time collaboration would allow law enforcement to work across jurisdictions and even get real-time feedback from specialists outside of their state or region.

We see the industry moving toward a comprehensive system that integrates CAD, RMS and LIMS functionality and manages data from separate investigative forces. Instead of entering information multiple times into multiple systems, everything is stored in one central location online and is updated to separate systems in real time. McKinsey (McKinsey.com) recently highlighted how new forms of automation can free up 25% of a worker’s time for higher value job tasks.

Case Study: How Baltimore is Using Cloud Technology
Steve O’Dell, Director of the Baltimore (Md.) City Police Department Crime Laboratory, says his department is taking full advantage of mobile devices and the cloud to improve their processes. He believes a big part of the crime fighting mission is using advanced crime scene techniques, along with the most advanced technology available to document criminal investigations.

Baltimore has used iPads to enhance the quality of evidence collection and recording out in the field. However, tablets alone don’t automatically improve the process. They also must include software that is tailored for the unique experience of officers in the field. Baltimore has been using CrimePad, an electronic case management tool to store all the data that is captured and share it with other personnel in real time.

“The crime scene needs to be processed and documented in the most thorough way possible,” says O’Dell. “CrimePad enables this in a number of different ways with a unique and user-friendly interface and advanced tools.”

One of the biggest benefits of mobile and cloud technology for Baltimore’s supervisors is the ability to view and review the investigation in real-time.

“The ability to experience the processing of the scene in real-time and communicate with crime scene personnel, outside the boundaries of the scene, minimizes the potential for contamination and improves processes with real-time mentoring,” says O’Dell.

These gains are only possible through the use of tablets that are easy to transport, easy to carry and easy to access. Coupled with video communication, printers and field kits, Baltimore is bringing the lab to the scene, rather than waiting for the scene to get to the lab.

Advantages of Using New Technology
Beyond the increases in efficiency and quality inherent to mobile and cloud technology, an adaptive, unified platform enables you to prepare for the future technology load. Mobile devices incorporate apps and add-ons from many technology vendors, helping you to future-proof your investment. The cloud can handle the data load easily from small initial amounts of data to large volumes as you scale your usage of these new systems.

When we get down to it, however, the reason we are doing all of this is to improve our investigations. Using advanced mobile and cloud technology delivers three extremely important benefits: law enforcement spends more time working on investigations; the quality and accuracy of information is increased; and police can be a more active presence in their community. By using collaborative, automated technology, officers won’t have to spend as much time on manual data entry and lengthy email conversations. They can spend more time not just out in the field collecting, automatically ordering and recording evidence, but also getting to know the people they’re protecting.

Using more technology doesn’t mean law enforcement is replaced by technology. Nor does it mean we’re changing the work we do. We’re changing how we do it, for the better.