The FBI has reportedly debunked the claim 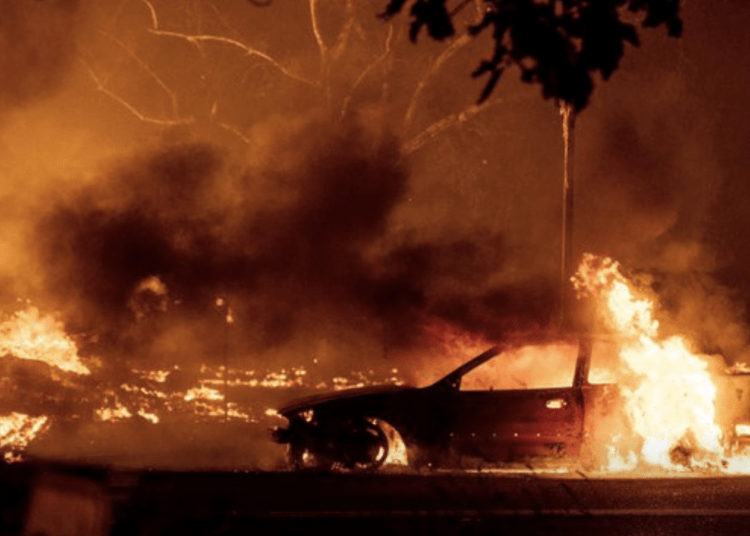 This photo was taken by Talent, Oregon resident Kevin Jantzer showing the destruction of his hometown. (Kevin Jantzer via AP)

CLACKAMAS COUNTY, Ore. — A sheriff’s deputy in Oregon has been placed on leave after a video surfaced in which he suggested left-wing activists had been “causing hell” in setting wildfires — a claim that has been debunked by the FBI.

Clackamas County Sheriff Craig Roberts said he placed the deputy on leave after learning of the video, which recorded the deputy referring to “antifa” and saying that people’s lives and property were at stake because “these guys got some vendetta.”

The FBI and other law enforcement agencies in the Northwest say they have investigated such reports and found them false, KTLA reported.

The deputy’s identity was not disclosed.

The sheriff said he would be on leave pending an investigation of making inappropriate comments and violating policy.

Authorities say having to debunk conspiracy theories and misinformation take valuable resources away from local fire and police agencies working to fight the fires and protect lives.

Reports that extremists are setting wildfires in Oregon are untrue. Help us stop the spread of misinformation by only sharing information from trusted, official sources. pic.twitter.com/ENc4c3kjep

The FBI said Friday that it’s investigated several claims and found them to be untrue, while officials in Oregon and Washington state have turned to Facebook to knock down the competing narratives — some posts blamed far-left antifa activists and others claimed the far-right group the Proud Boys were responsible for the fires scorching wide swaths of the region, AP News reported.

“I am physically and emotionally exhausted. We’ve been working really hard to protect people’s lives and homes,” firefighter Matt Lowery wrote Thursday night on the Facebook page for the East Pierce Fire & Rescue union south of Seattle. “I also want to address an issue that keeps coming up, even from some of the public that we are talking to while working. It is hot, dry, and fire spreads quickly in those conditions. There is nothing to show its Antifa or Proud Boys setting fires. Wait for information.”

The FBI said it worked with local authorities to investigate claims that extremists set wildfires and found them to be false.

“Conspiracy theories and misinformation take valuable resources away local fire and police agencies working around the clock to bring these fires under control,” an FBI statement said. “Please help our entire community by only sharing validated information from official sources.”

Officials in Oregon also debunked claims this week of widespread arrests affiliated with the Proud Boys or Antifa.

“Remember when we said to follow official sources only,” the Douglas County Sheriff’s Office posted Thursday. “Remember when we said rumors make this already difficult incident even harder? Rumors spread just like wildfire and now our 9-1-1 dispatchers and professional staff are being overrun with requests for information and inquiries on an UNTRUE rumor that 6 Antifa members have been arrested for setting fires in DOUGLAS COUNTY, OREGON.”