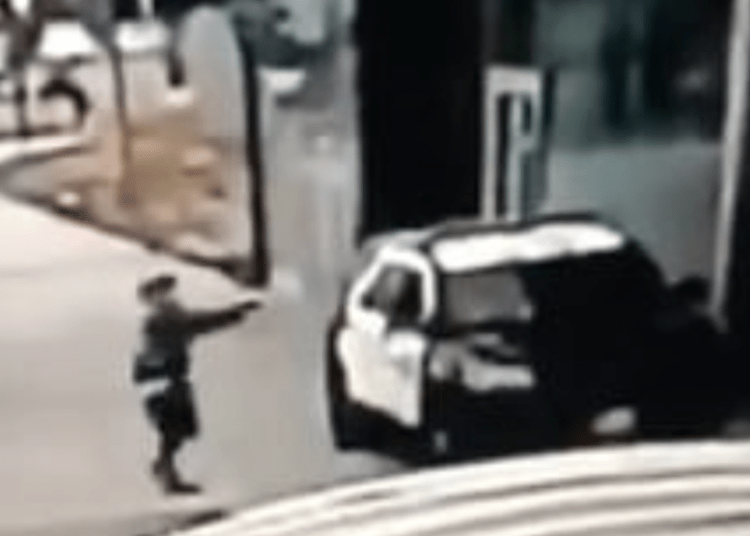 COMPTON, Calif. — Two Los Angeles County Sheriff’s Department deputies are “fighting for their lives” after they were shot in the head in an ambush at the Metro station in Compton, officials say.

The incident happened Saturday at the Metro Blue Line station at Willowbrook Avenue and Compton Boulevard around 7 p.m. The location is a short distance from the Compton sheriff’s station, ABC 7 reported.

As a result, a manhunt for the suspect was underway early Sunday.

The deputies, a 24-year-old man and a 31-year-old woman, were both in critical condition as they underwent surgery following the attack, according to the Los Angeles County Sheriff’s Department.

“Moments ago, 2 of our Sheriff Deputies were shot in Compton and were transported to a local hospital,” the department tweeted. “They are both still fighting for their lives, so please keep them in your thoughts and prayers.”

The deputies were out of surgery by 11 p.m. PT, according to KABC-TV.

Update: The gunman walked up on the deputies and opened fire without warning or provocation. pic.twitter.com/cBQjyKkoxJ

Both deputies were sworn in just over a year ago and the female deputy is the mother of a 6-year-old boy, officials said in a 10 p.m. news conference. Both of their families were rallying around them at the hospital.

Sheriff Alex Villanueva said while authorities don’t have a detailed suspect description, one of the deputies described the shooter as a “dark-skinned male.”

Villanueva said the shooting shows the dangers officers face in the streets and how situations can change in “the blink of an eye.”

“I am praying for the officers involved and their families,” Jones-Sawyer said at the news conference. “This was an unprovoked, cowardly act.”

Confirmed via witness who talked to ABC7: Says protesters made derogatory comments towards deputies and tried to get inside the emergency room. https://t.co/qxeR54Rywt

Villanueva said the shooting seemed to follow a growing trend of suspects opening fire on law enforcement officers without provocation.

“Every week across the nation someone is losing their life in the line of duty,” he added. “It pisses me off, it dismays me at the same time. There’s no pretty way to say it.”

Villanueva expressed his condolences to the families of the deputies, adding, “Hopefully they can both heal from this.”

FBI Los Angeles tweeted it has “offered resources and stands ready to assist” in response to the attack.

We stand with our brothers and sisters at the @LASDHQ tonight. The thoughts and prayers of the men and women of the LAPD, are with the two deputies that were ambushed while sitting in their vehicle earlier this evening. https://t.co/zW4MKi6j6v

The Los Angeles Police Department tweeted, “We stand with our brothers and sisters at the @LASDHQ tonight. The thoughts and prayers of the men and women of the LAPD, are with the two deputies that were ambushed while sitting in their vehicle earlier this evening.”

A handful of anti-police protesters showed up at the hospital where the deputies were being treated but soon dispersed after some tense moments with authorities who were guarding the entrance, KABC reported.

A local faith leader who came to the hospital to pray for the deputies, told a KABC reporter that some of the protesters had been shouting slogans like “Death to police!”

Protesters were blocking the entrance to the hospital emergency room and yelling, “We hope they die,” referring to the two deputies, the sheriff’s office said.

A local radio reporter was also apparently arrested amid the chaos. County Undersheriff Tim Murakami said he was looking into the arrest, according to a reporter with KPCC Public Radio. In an update, he said the reporter was being released but would be charged with a misdemeanor.

UPDATE #5: @LASDHQ claims @josie_huang "ignored repeated commands to stay back" as deputies arrested someone and "did not identify herself as press." Another reporter heard her shouting @KPCC Radio – plus check out the photo below. https://t.co/S82ccPSft8

The sheriff’s office later confirmed an adult female, who was later identified as a member of the press, was arrested. Authorities did not immediately identify the woman.

The woman had not identified herself as a member of the press, according to the sheriff’s office, and later admitted she did not have proper press credentials on her person.