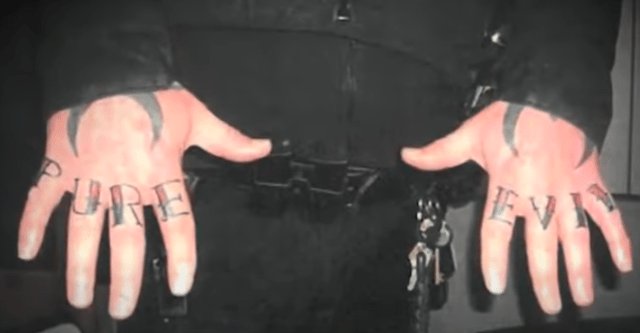 Eric Weyda was fired from the Cincinnati Police due to his tattoo. (Screenshot WLWT - YouTube)

CINCINNATI – A police officer in Ohio was fired in late April due to policy violations that stemmed from his choice and location of a tattoo.

Eric Weyda was terminated from the Cincinnati Police Department after getting “PURE” tattooed on his right knuckles and “EVIL” on his left knuckles.

Weyda is fighting for reinstatement. He has appealed the decision to fire him and filed a grievance through the Fraternal Order of Police, WLWT News reported.

FOP President Dan Hils released the following statement: “The FOP represents all Cincinnati police officers when they participate in the grievance process outlined in our collective bargaining agreement. Every officer is entitled to a fair hearing and that’s what will take place here.”

According to public records obtained by the news outlet, Weyda was terminated for insubordination and failure of good behavior.

His superiors first learned of the tattoos four months prior to his firing. Under department policy, officers are prohibited from getting tattoos on their face, neck, head, and hands, Newsweek reported.

In addition to the policy violations, the department noted the phrase he chose to tattoo on his hands did not lend itself to a healthy relationship between police and the public.

According to WLWT News, a captain wrote in summary of the officer’s disciplinary hearing, “Weyda showed remorsefulness for obtaining the tattoo and acknowledged a lack of discretion since he obtained the tattoo in December 2021. Furthermore, Officer Weyda stated, like all of his tattoos, his hand tattoo has a personal message to him, and the words ‘pure evil’ should not be observed as one message. Officer Weyda explained the words ‘pure’ and ‘evil’ are separate from each other and the words themselves have separate meanings.”

Finally, the summary goes on to say Weyda explained to the Internal Investigations Section the tattoo is meant to represent a “struggle between good and evil.”

Weyda reportedly said during his disciplinary hearing that he could not afford the cost to have the tattoos removed.