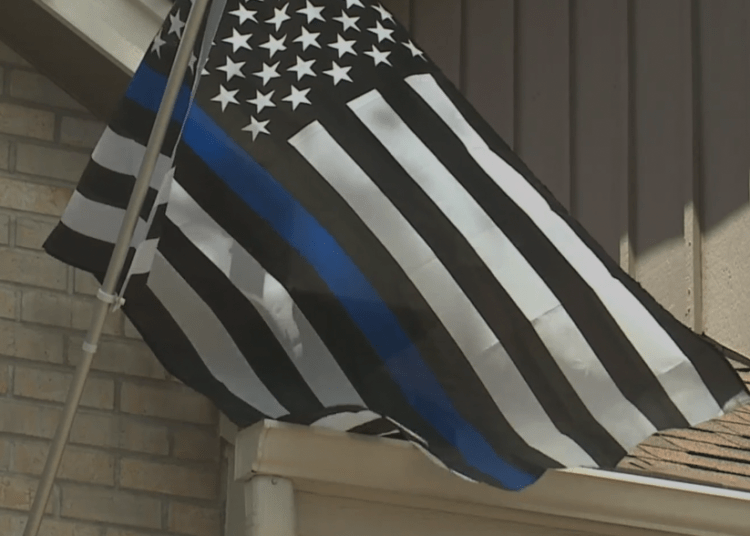 PATASKALA, Ohio — A father’s determination and fight to fly the Thin Blue Line flag to honor the memory of his son who was killed in the line of duty has inspired a bill at the Ohio Statehouse.

Thomas DiSario received a Thin Blue Line flag in memory of his son, newly minted police Chief Steven Eric DiSario, who was shot and killed while responding to a call at a Kirkersville nursing home in 2017. The younger DiSario was murdered along with two workers from the home. The gunman was found dead inside, Law Officer previously reported.

“It’s been flying since the 12 May 2017,” said Thomas DiSario, giving the date his son was murdered. “The only time it comes down if it’s worn out and I buy a new one and put it back up.”

Yet it May of this year, he received a letter from his homeowners’ association telling him to take the flag down. Adding insult to injury, the demands came during National Police Week.

Rep. Kevin Miller (R-Newark) joined Rep. Tim Ginter (R-Salem) to introduce HB 712. The bill adds the Thin Blue Line flag to the list of flags that homeowners and condominium associations must allow. If successful, the police-honoring flag will join the POW, MIA, military, and American flags previously listed in this category.

Miller remembers attending Steven DiSario’s funeral when he was a commander with the Ohio State Highway Patrol.

“That flag is about his son who gave his life in the line of duty,” Miller said. “That’s something that’s very special to him and we’re just looking to protect that.

“For me and my joint sponsor Rep. Ginter, this is all about honoring those who have paid the ultimate sacrifice. Supporting those who currently are serving as our police officers, and it’s also about promoting the profession as well. We’re having significant problems with retention and recruitment.”

National Police Association attorney James Bopp filed a federal First Amendment lawsuit against an HOA on behalf of a homeowner who wants to fly the Thin Blue Line flag, according to NBC 4.

“It’s really courageous people that come forward and are prepared to say, ‘Well, this law’s not right. I have a right to fly a flag,’” Bopp said. “We are just very happy that the Ohio legislature is recognizing the need to permit people to do this.”