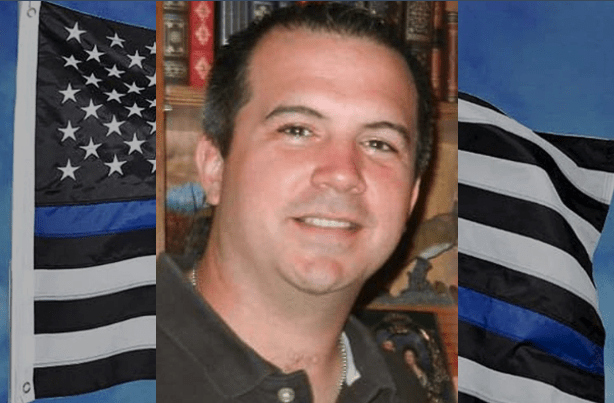 PATASKALA, Ohio — A little more than five years ago a gunman killed three people at a Licking County nursing home. One of those who died was the newly appointed police chief of Kirkersville, Steven Eric DiSario.

DiSario’s father, Thomas DiSario, has flown a Thin Blue Line flag at his home since then. Yet this week he received a letter from his homeowners’ association telling him to take the flag down. Adding insult to injury, the demands came during National Police Week.

The elder DiSario not only received the admonishing letter, but had to chase away an individual trying to remove the flag from his property, informnny reported.

“It’s been flying since the 12 May 2017,” said Thomas DiSario, giving the date his son was murdered. “The only time it comes down if it’s worn out and I buy a new one and put it back up.”

The original flag was a gift from law enforcement colleagues of Steven DiSario. He was first to respond to a call at the Pine Kirk Care Center. Deputies responding afterward found his body on the street outside and two employees and the gunman dead inside.

“He was answering a call in Kirkersville, and he was shot and murdered as he got there. So, he didn’t even know it was coming,” Thomas DiSario said.

Steven DiSario was 38-years-old and a father of six, with a seventh on the way when his life was cut short by the gunman, according to the news outlet.

On Saturday, Thomas DiSario, a disabled veteran from Operation Desert Storm, found a person on his property taking down the Thin Blue Line flag and the American flag that flies above it.

During the conflict with the obstinate trespasser, DiSario eventually called the Licking County Sheriff’s Office. The deputy who responded said neighbors also saw the individual, but he could not be located.

Then on Monday, DiSario received a letter from the Omni Community Association Managers, making the (false) claim that the Thin Blue Line flag was a political sign and, and therefore had to be removed per association rules, informnny reported.

DiSario said he is being harassed for flying a flag that’s a memorial to his son who sacrificed his life for the community.

“I spent 23 years in the military, and there’s no way shape or form that flag is being flown disrespectful at all,” he said. “It has a 4×6 American flag above it, and the police flag is a 3×5 below it. It is no bigger than the top flag.

“It represents my son and nothing else. So I don’t know why everybody is now harassing me that I have to take it down.”

President of the Omni Community Association Managers, David Dye, claims the Thin Blue Line flag is in violation of deed restrictions that are established in the community.

“They bought into the community with rules,” Dye said. “He agreed by buying in this community that he can’t display what he wants to display.”

Dye also said the man who showed up to remove the flags was not affiliated with the HOA.

There have been 107 law enforcement line of duty deaths (LODD) thus far in 2022, according to ODMP. Of those deaths, 20 have come from gunfire and seven from vehicular assaults.