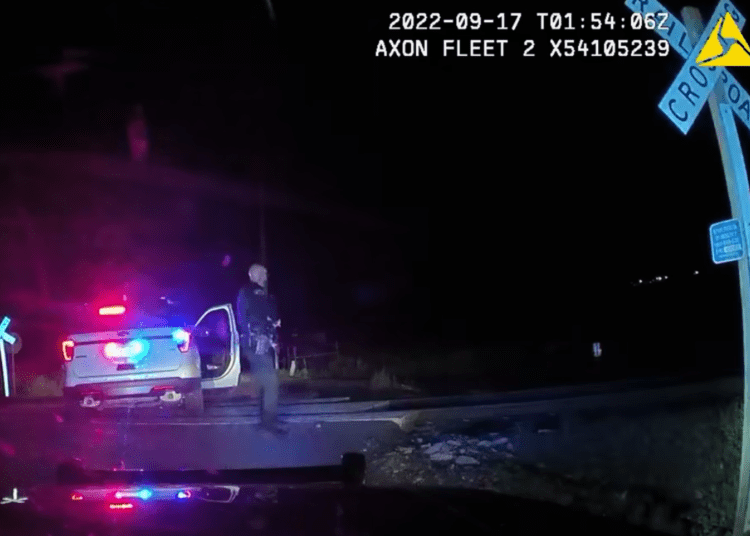 FORT LUPTON, Colo. – Two police officers in Colorado will face criminal charges after a 20-year-old woman was seriously injured in September when she was struck by a train while handcuffed in the back seat of a patrol SUV stopped on a railroad crossing.

Jordan Steinke of the Fort Lupton Police Department and Pablo Vazquez of the Platteville Police Department had criminal charges filed against them, the Weld County District Attorney’s Office said in a statement Monday, according to NBC News.

Steinke was charged with one count of criminal attempt to commit manslaughter and one count of second degree assault, both felonies, as well as one count of reckless endangerment, a misdemeanor,

Yareni Rios-Gonzalez’s was seriously injured in the crash. According to her attorney, Jonathan Stine, she sustained a broken arm, fractured ribs, lost teeth, as well as head and leg injuries, NBC reported.

Despite her injuries, she was charged with one count of felony menacing, the district attorney’s office said.

Steinke and Vazquez were issued a notice to appear in court to face the charges, according to the DA’s office.

Rios-Gonzalez was also issued summons to appear in court.

The police unit remained on railroad tracks following an incident with a woman in police custody in the back seat when the vehicle was struck. She survived the horrific wreck and has been in the hospital with serious injuries since the crash, CBS Colorado reported.

Platteville officers found the vehicle being operated by 20-year-old Yareni Rios-Gonzalez of Greeley. A felony car stop occurred at US 85 and County Road 36, according to 9 News.

The high-risk traffic stop occurred with the first unit stopped on the railroad tracks. Then, Fort Lupton officers showed up, and together, they conducted the take down.

The edited 8-minute video showed the officers approach of the vehicle Rio-Gonzalez was driving, the moment of the crash and moments that took place afterward, according to CBS Colorado.

Rios-Gonzalez, who works as a TSA agent, is conscious and able to talk. She suffered nine broken ribs, a fractured sternum, a broken arm and numerous other injuries to her head, back and legs, her attorney, Paul Wilkinson said.

“She’s definitely upset about what happened. She doesn’t understand why she was left in the car. She was yelling to get their attention and could see the train coming,” Wilkinson said.

The Fort Lupton Police Department has submitted a felony summons against the woman with the Weld County District Attorney for review.

It’s unclear what evidence was obtained prior to the train crash.

“Our intake attorney will be looking at it to determine if charges will be filed,” an office administrator for the district attorney said via email, according to 9 News.

However, the Weld County District Attorney’s Office told the news outlet earlier in the week that it would also review potential charges against police in the case.