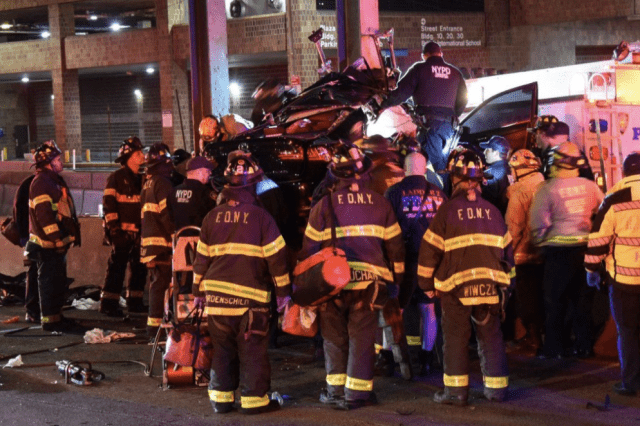 NEW YORK – An off-duty New York City police officer is dead and two other people were critically injured when their car crashed into a median on the highway early Saturday morning, reports say. One of the injured individuals is a member of FDNY, according to sources.

A 25-year-old, believed to be an off-duty NYPD officer, was driving northbound on the FDR near 23rd St. at around 2:30 a.m. when he reportedly lost control of his 2016 black Lexus, crashing into a median beneath a pedestrian footbridge, the New York Post reported citing police.

The driver was transported to a local hospital where he was pronounced dead.

Manhattan | FDR Drive.
1 person killed, two others are in critical but stable condition after a single-vehicle crash on the FDR Drive n/b near E. 23rd St. pic.twitter.com/dpYmcMYKBS

Police said another 25-year-old man sustained body trauma after he was ejected from the vehicle into oncoming traffic. The New York Daily News reported this person was a member of FDNY.

Video footage obtained by The Post shows the vehicle wrapped around a support pole in the median of the highway while emergency responders work to remove the car.

Sources told the Post that a second passenger, a 25-year-old woman, lost a leg in the crash.

Images from the scene showed the vehicle completely wrapped around a beam in the center divide with the roof torn off.

The passengers were taken to the hospital in critical condition. However, they are now said to be stabilized, police said.