The deputy's children were also home with her 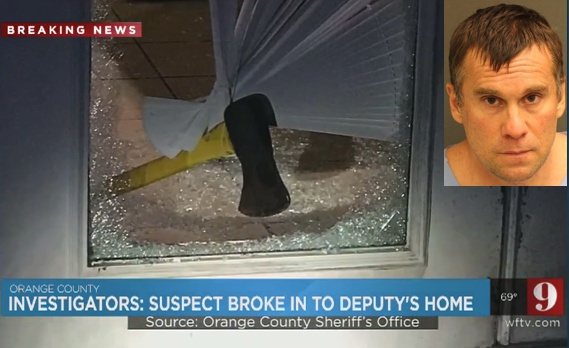 An off-duty deputy shot an ax-wielding suspect who was breaking into her home. (WFTV/Orange County Sheriff's Office)

APOPKA, Fla. — A burglary suspect breaking into homes by using an ax was shot by an off-duty deputy who lived in one of the homes targeted by the perpetrator, according to the Orange County Sheriff’s Office.

Officials said a man, identified as Steven Thayer, 40, used the ax to break through the back door of the home while Deputy Bridget Erwin was home with her children, WFTV reported.

Here’s the first look at the suspect Orange County deputies say was shot by a deputy as he tried to break into her Apopka home with an axe. Steven William Thayer is now out of the hospital and facing several charges. More at 4 on #WFTV. pic.twitter.com/9swK6ImzZr

“I think (the deputy) did a great job — she protected herself and her kids, who were at home with her,” Sheriff John Mina said. “Just like any normal person, I think she’s shaken up by this.”

The sheriff said Thayer was shot several times in the lower extremities as he tried to make entry in the home, which was one of several that he broke into.

After struggling with Thayer, Erwin managed to get him into handcuffs and administer lifesaving techniques, Mina said.

Mina said deputies were already in the Rolling Oaks subdivision after multiple reports of attempted burglaries involving the same ax-wielding man, so authorities arrived at the deputy’s home shortly after she called for help, ClickOrlando reported.

Moreover, he is also facing charges of burglary of an occupied dwelling and battery for an incident that occurred just prior to the one involving the off-duty deputy.

Mike Largent, a neighbor, said he is thankful it wasn’t his home.

. @SheriffMina briefs the media about a shooting that occurred when a burglary suspect broke into a deputy’s home in Apopka. pic.twitter.com/CoFmCZ6bvU

Mina offered support for the deputy’s actions in an “extremely traumatic” situation.

“This could happen to anyone but our deputies are trained to protect ourselves, protect our communities and this person broke into a deputy’s home with an ax — and who knows what his intentions were — but anyone like that is going to be met with lethal force by our deputies and I think she did a great job,” Mina said.

Deputy Erwin has been a sworn member of the agency since May of 2018.

Two career cops who never met discover they are half-brothers