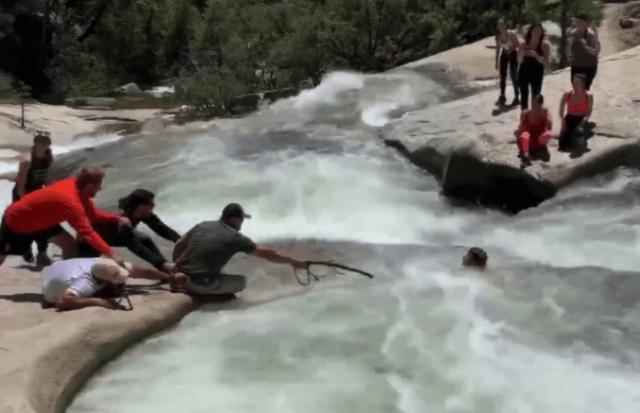 Off-duty CHP Officer Brent Donley rescues a 24-year-old man from Fresno who ended up trapped in a whirlpool on Saturday. (Christina Donley via Storyful)

MADERA COUNTY, Calif. – An off-duty California Highway Patrol officer is being acknowledged for his quick-thinking after a hiker ended up trapped in a whirlpool on Saturday.

The Madera County Sheriff’s Office said on Facebook the incident happened around noon when the 24-year-old hiker from Fresno attempted to cross Angel Falls near the village of Bass Lake, located about 14 miles from the south entrance of Yosemite National Park.

“The flow overwhelmed and swept him into a whirlpool, which held him under,” the sheriff’s office said.

The sheriff’s office said the hiker misjudged the swiftness of the water when he decided to walk across.

With snow runoff, the cold spring water is flowing at about 50 to 80 feet per second.

“That’s about like 50-80 basketballs full of water every second,” the sheriff’s office said.

As the man was struggling to stay above the water, an off-duty CHP officer just happened to be hiking nearby along the Willow Creek trail above Bass Lake.

Officer Brent Donley, who is trained in search and rescue and in possession of a rope, quickly responded to help, according to MCSO.

Donley gained the assistance of a few others in the area, and they saved the drowning man by throwing him a rope and pulling him to safety while a crowd formed to watch the rescue.

The off-duty officer stayed with the Fresno man and provided first aid until search and rescue deputies and EMS arrived at the scene, Fox News reported.

The sheriff’s office said the man who was rescued was lucky and “needs to buy a lottery ticket.”

“We sincerely thank Officer Donley for his quick-thinking and preparedness,” MCSO wrote. “This Search and Rescue call could have ended very badly if not for his help.”