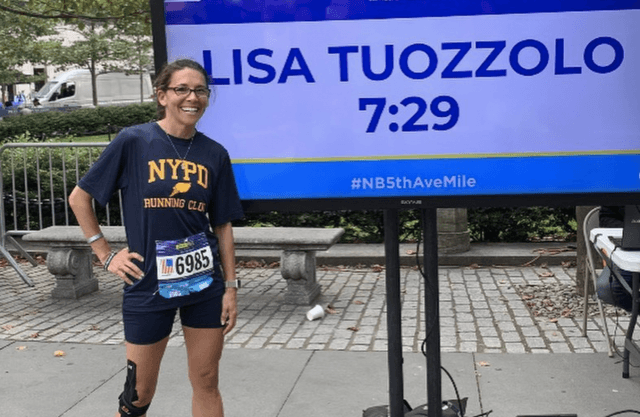 NEW YORK – The New York City Marathon gets underway on Sunday with over 50,000 runners participating from all over the world.

Lisa Tuozzolo, the widow of fallen NYPD Sgt. Paul Tuozzolo, is one of those runners set to take on the 26.2 miles, Fox News reported.

Paul Tuozzolo died and a second officer was wounded when an ex-con opened fire on them in the Bronx. Appearing on “America’s Newsroom” with host Bill Hemmer, Lisa Tuozzolo said there is not a day that goes by that she doesn’t think about her husband.

“Paul was killed November 4, 2016, which will be three years ago on Monday, just following the New York City marathon,” she said, adding “not a day” goes by that she doesn’t think about him.

During the long journey, Tuozzolo will have 70 officers running every mile with her to “metaphorically represent my family in Blue always being there.”

“It will be started off by our Chief of Department: Chief Terence Monahan. And, he’ll be doing the first three with me. And then, from that point on, the department is taking over,” she told Hemmer.

We at Silver Shield Foundation have the #FridayFeels! Our team is Marathon Ready! We are excited to have @lisamartinolichtuozzolo run in honor of our fallen heroes. • “My #Why is to ensure that Paul is never forgotten. I am running for the children and families of our fallen heroes and to ensure they are always remembered.” -Lisa Tuozzolo • #SSF #Heroes #NYCMarathon #FridayFeels #Team #NeverForget #Remember

A post shared by Silver Shield Foundation (@silvershieldfoundation) on Oct 18, 2019 at 3:28pm PDT

Tuozzolo is running with the Silver Shield Foundation, a charity organization created to financially assist fallen officers’ children with education funding. She has a specific theme in mind: “Never alone; never forgotten.”

“So, obviously, never forgetting my husband every single day, but never alone to signify my Blue family. My family in Blue, that are aunts and uncles to my two little boys–6 and 7 years old,” Tuozzolo said.

“This is a fight that I will fight through every single moment,” she added. “We might have been dealt a bad hand, but that doesn’t mean it’s going to stop us.”