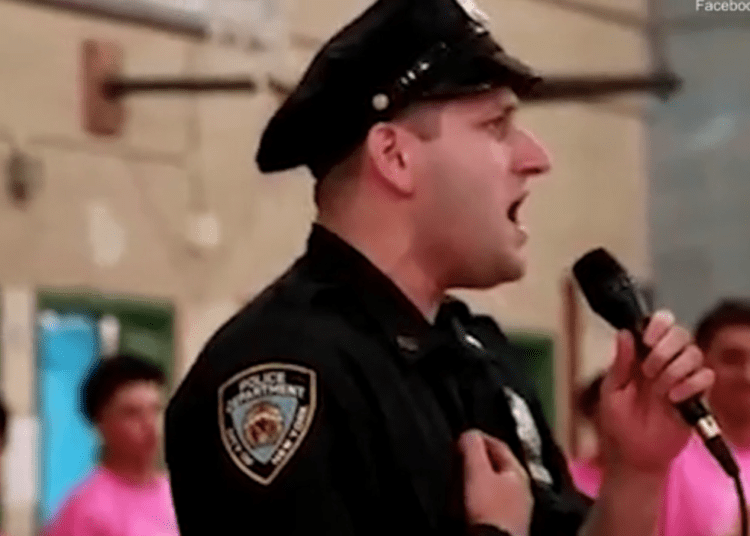 NEW YORK – A New York City police officer who was well known for his singing voice took his life by jumping from the Throgs Neck Bridge. His body was recovered Tuesday evening after he leaped from the bridge the night prior, the Daily Mail reported.

The deceased officer was identified as 38-year-old Scott Cohn. The six-year police veteran worked out of the 90th Precinct in Brooklyn. He was also known for singing the National Anthem at NYPD events.

Police sources told the news outlet that Cohn was experiencing emotional difficulty due to his work and considered resigning.

“I know he wasn’t happy on patrol,” a Brooklyn officer who knew him said.

“He wasn’t happy with the treatment police are getting, the current environment. But that’s not really a reason to want to kill yourself. Anybody can leave the job.

“He was a very friendly, pleasant guy.”

As a talented vocalist, Cohn was often asked to perform his rendition of God Bless America as a representative of NYPD.

Cohn’s vehicle — a Honda Civic — was left on the the bridge, which connects the Bronx and Queens, high above the East River.

The Triborough Bridge and Tunnel Authority (TBTA) alerted police that the abandoned automobile was discovered about 10:20 p.m. on Monday and that an unknown person had apparently jumped, according to NYPD.

Sources disclosed that security footage showed a person walking near the vehicle a few minutes prior to jumping, the Daily Mail reported.

Despite stormy skies, several marine units from NYPD, FDNY, and the U.S. Coast Guard participated in a late-night search without favorable results.

The effort was terminated after several hours, before resuming Tuesday.

Cohn is the fourth NYPD officer to die by suicide this year. Sadly, the agency averages four to five suicides per year.