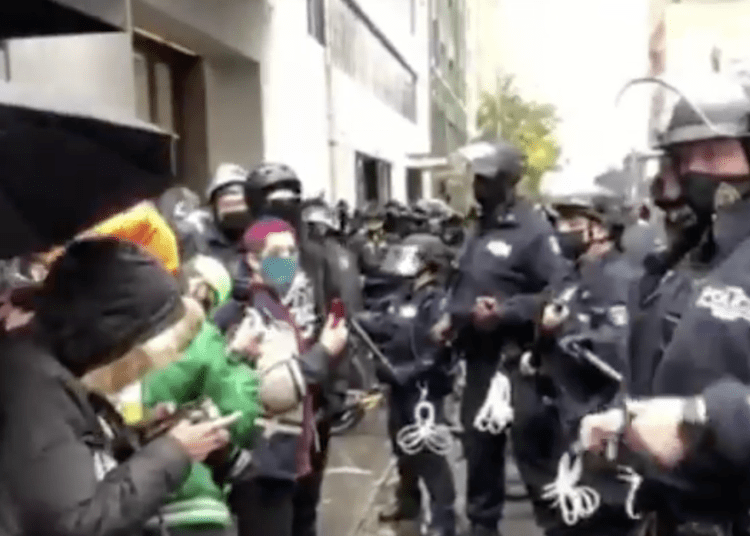 Video captured by the New York Post shows the police shoving protesters and blocking their path on the sidewalk at West 24th Street and 10th Avenue.

“Stop! Stop pushing me!” one protester shouts as police barricade the street.

A later clip shot by the news organization shows protesters lobbing one insult after another at officers.

“You tell people to get on the f–king sidewalk, then you push us off the fucking sidewalk,” another says. “This is America, right?”

According to a report, police arrested two journalists and eight counter-protesters during the unrest, FNTV said on Twitter, something NYPD later disputed.

Cops arrested 2 journalists and 8 counter protesters in Chelsea, NYC, today. They were there to counter protest the #MAGADrag caravan that did not go through the expected parts of Manhattan

According to reports, NYPD tried to draw a distinction between journalists and those it officially recognizes through the issuance of a press pass.

“All arrested individuals from today’s protests have been verified to not be NYPD credentialed members of the press,” the department said on Twitter.

It is being reported on social media that earlier today members of the press were arrested during a protest in Manhattan.

These reports are false.

All arrested individuals from today's protests have been verified to not be NYPD credentialed members of the press.” pic.twitter.com/Xbxhk1FK79

The anti-Trump group marched to the West Side Highway, before dispersing after concluding the Trump caravans were likely avoiding Manhattan.

NYPD was not immediately able to provide further details.

New York State Police did not immediately respond to a request for comment.

Meanwhile, in Texas, someone traveling with the Biden campaign called 911 after a group of Trump supporters escorted their tour bus on Interstate 35 between San Antonio and Austin, Law Officer reported.

As the activity continued in the region, it became known as a “Trump Train.”

Biden campaign officials said afterward that they feared the Trump devotees might run their bus off the road. However, nothing of the sort ever occurred. Neither Joe Biden nor Kamala Harris was aboard the bus.