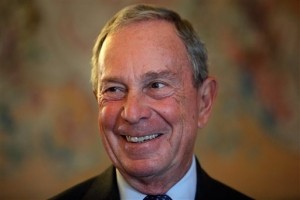 NEW YORK (AP) — New York City's decade-long, multi-billion dollar effort to overhaul its 911 system is $700 million over budget and years behind schedule due to a series of mistakes made by former Mayor Michael Bloomberg's administration, according to a Department of Investigation report.

The probe — which was ordered by Bloomberg's successor, Bill de Blasio, and released on Friday — found "persistent mismanagement" between 2004 and 2013 led to the cost overruns, delays and a project that remains unfinished.

"For years there was no central decision maker that would insist that all the agencies involved be on the same page and operate together," said Department of Investigation Commissioner Mark Peters, in an interview about the report's findings.

"The people in charge of running the project failed to properly manage on a real close level the contractors and consultants they hired," Peters said. "And there was a real lack of transparency — we didn't have accurate reports on how the project was going and how much it was costing."

Former members of the Bloomberg administration disputed the findings.

The terrorist attacks of Sept. 11, 2001 and the blackout that enveloped much of the Northeast in 2003 prompted the Bloomberg administration to commission a program to modernize the city's 911 system, which had suffered failures during each crisis.

The Bloomberg administration's plan was sweeping. It aimed to obtain better communication gear for first responders, streamline and safeguard the 911 call-taking and dispatch system, and merge the city's Police, Fire and Emergency Medical Service dispatching systems into a joint operation to be located at two secure centers.

The original plan was budgeted at $1.345 billion and set to be finished by September 2007. But it may not be fully finished until 2017 and costs have ballooned to $2.031 billion, according to the probe.

By 2012, the new call-taking software had been installed and one multi-agency dispatching center — known as Public Safety Answering Centers — was completed in downtown Brooklyn. But the second center being built in the Bronx is not fully operational. The fire department's computer-aided dispatch system also has not yet fully come online, according to the DOI report.

The probe did not discover any criminal behavior but laid the blame squarely at the feet of the Bloomberg administration. It said that the former mayor's team allowed private contractor costs to soar out of control and that it did not initially devote the needed oversight to a project of this scope. The report also suggests the former mayor's team attempted to keep news of the rising costs from the public.

Former members of the Bloomberg administration strongly pushed back against the investigation's findings.

They stressed that the modernization was badly overdue and pointed to the massive improvements to the system, including several layers of redundancy that could kick in during a crisis and the 911 system's ability to field 50,000 calls an hour, a dramatic increase. The officials also noted delays at the Bronx dispatching center were in part because the original venue for the center, in Queens, was later deemed unfit.

"The Bloomberg administration committed to and delivered a new, reliable and redundant 911 system that serves New Yorkers far better than the decrepit, fragmented systems it replaced," Holloway wrote in a report released in advance of DOI's findings.

Bloomberg's team also blamed a pair of contractors, Verizon and Hewlett-Packard Co., for delivering products that were faulty and behind schedule. Verizon later paid the city $50 million to compensate for the delay while HP paid $33 million in a settlement.